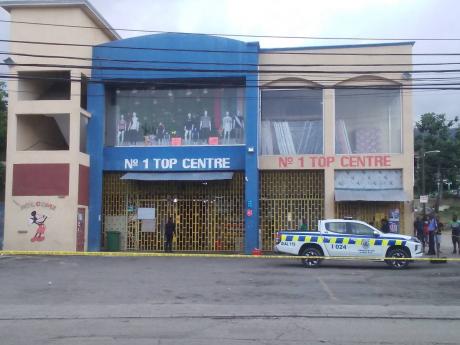 Photo by Hopeton Bucknor
Officers from the Sandy Bay Police Station process the scene of a robbery at the No 1 Top Centre in Hopewell, Hanover, yesterday after gunmen made off with more than $1 million in cash.

Armed robbers pulled off a daring million-dollar heist in Hopewell, Hanover, the second such incident since Friday, raising the level of panic among residents and business operators in the seaside community.

Shortly after 2 p.m. yesterday, as dozens of shoppers were inside the No. 1 Top Centre, three mask-wearing men drove to the location, posing as customers, before brandishing handguns.

They held the Chinese operators at gunpoint and robbed them of cash estimated to be more than $1 million before fleeing the store, firing several shots into the air as they ran to a waiting motor car, making their escape.

On Friday afternoon, gunmen went to a Supreme Ventures outlet, also along the Hopewell main street, and robbed the proprietor of the day’s sales.

Prior to that incident, gunmen reportedly held up and robbed another set of Chinese business operators of cash, also estimated to be more than $1 million. The incident occurred during the last week of December as the operators of a supermarket along the Hopewell main street were walking towards their house, just a few chains from their business place.

On reaching a section of the roadway, they were held at gunpoint by two armed men, who robbed them of a bag they were carrying with cash.

Residents blamed the increase in such incidents to a lack of foot patrols by cops in the area.

President of the Hopewell Citizens’ Association, Derrick Wright, told The Gleaner that he is very concerned over the recent spate of attacks, especially on the Chinese-operated businesses within Hopewell.

He is calling for a greater police presence in the community, saying that for far too long Hopewell has been promised a police post, which is yet to materialise.

“If I can remember correctly in April of 2015, we were promised a police post by the Police High Command ... and every time we have a upsurge in crime, and we as the citizens’ association raise that topic, the promise comes back,” Wright stated.

“The most recent promise was made by Superintendent Sharon Beeput about two to three years ago, where we were made to understand that the police had gotten the go ahead from the Electoral Office of Jamaica to construct a police post on their building in Hopewell, and at another point in time, we heard that a post was to be erected above the Hopewell Market, but none of those promises have come true.”

Wright extended commendations to two traffic officers who are constantly seen working in the Hopewell community, but said that there was only so much they could do as the area is under-policed.