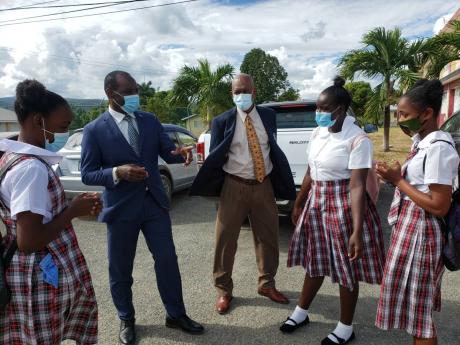 At least two principals in St Thomas who have opened their doors for the resumption of face-to-face classes have raised concerns about a percentage of students who have not been engaged since the closure of schools in March 2020.

These students, according to the principals, have neither shown up for online sessions, face-to-face classes nor have they made contact with the school.

Speaking with The Gleaner, Mark Malabver, principal of Yallahs High School, one of the three institutions in the parish to have returned to the physical classroom, says that roughly 20 per cent of his students are unaccounted for.

The other schools that were opened last week in St Thomas are Paul Bogle High and Seaforth High.

“Our data is revealing that we have students who have not reported to school,” Malabver said. “We have collated that data, and come [this] week, we intend to send out a team of individuals, personnel from the school, to find out what is happening and why it is that these students are not coming online or to school.”

Sharing, too, that a similar one-fifth of his students have gone off the radar, Carey Kelly, head of staff at Paul Bogle High School in Yallahs, said that this could be due largely to their socio-economic conditions.

“There is work going on the road now, and quite a number of our students are earning something that they really need, something which even the parents endorse. Most of the students here are from low socio-economic background, so it’s just a part of the reality,” he told The Gleaner. “Some students are trying to earn for the family and themselves ... . I saw two students [last Wednesday], and they said, ‘Mr Kelly, I’ll be getting paid this weekend, so you’ll see me on Monday.’ So it seems they are earning something so they will be able to attend school.”

Kelly said that the face-to-face classes started off with a low turnout but that the attendance had gradually improved during the course of the week.

During a tour of the schools, Jamaica Teachers’ Association President Jasford Gabriel commended the institutions for what he described as their exceptional compliance with the various COVID-19 regulations. However, he admitted that a few observations called for concern.

“Some of the concerns were quite predictable. The issue of Internet connectivity coming from Seaforth High School, for example, is a very urgent matter that has to be attended to because the principal and teachers are very concerned that the students who are at home are not able to be engaged in the teaching and learning process, and some were online consistently before the face-to-face,” he said.

“Also, we’re picking up from the teachers in all the schools, even in Kingston, that there is a great need for resources for the teachers, specifically as it relates to laptops. We believe that while provisions are being made for students to receive tablets, we must make adequate provisions as well for our teachers so they have the requisite tools to provide the best-quality education for their students,” Gabriel said, pointing out that at Seaforth High and some other institutions, teachers had to be taking their personal modems to school to connect with students at home.

He pointed out that with some teachers also being parents, there were additional challenges as there is no provision for the supervision of their own children.