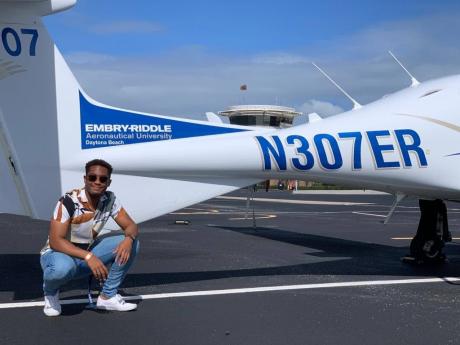 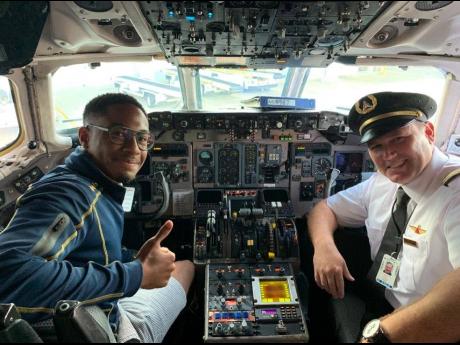 Contributed
Daniel Buchanan in the cockpit with a first officer at Delta Air Lines and past student of Embry-Riddle Aeronautical University.
1
2

Daniel Buchanan was four years old when he developed a love for planes and almost two decades later, he is a Federal Aviation Administration-licensed commercial pilot and flight instructor.

Born in the United States, his father would take him to John F. Kennedy International Airport after school most days, and they would plane spot until the security moved them.

These daily airport visits were just the beginning of his soaring journey to a career in aviation.

His family soon moved to Jamaica, where he finished preparatory school and then transitioned to Ardenne High School.

“While living in Jamaica, my love for flying never went away, and I pushed myself to complete a private pilot ground school in 2012 at the Tinson Pen Aerodrome and did a few flights to keep the flame burning,” the 23-year-old told The Gleaner.

After high school, Buchanan returned to the US to attend his dream school, Embry-Riddle Aeronautical University in Florida.

He remembers flying on his first day of university at 6 o’clock on a cloudy morning.

“It turned out to be a great flight. There’s just an unexplainable rush of adrenaline that comes over your body when you really love what you’re doing and I felt it, and I still feel it every single time I fly or talk about flying,” he said glowingly.

Attending that university meant that he was able to move on to the next phase of his career with 500 fewer flight hours than what is normally required, due to the structured and detail-oriented nature of its aeronautical science curriculum.

“Flight training for me was like a two-part job. I had the academic side of it, where I was a full-time college student, but I also had to make time during the week to fly at least three times. I started out as a student pilot, eventually working my way to a private pilot in 2018. Later that year, I got my instrument rating, which allowed me to fly without looking outside. All I needed were the instruments inside the cockpit. In February 2020, I became a commercial pilot, which is everyone’s dream because you can now get paid to fly,” he shared of his accomplishments.

He told The Gleaner that his family has always been supportive of his dreams, as in his earlier years when he was too young to fly, his parents introduced him to pilots and gifted him books about planes and the aviation industry to fuel his interest. They also entertained his never-ending conversations about planes.

“I always think back to four-year-old Daniel standing at the airport watching all the planes go by and then fast-forward to the present time, where I’m at the point where I can fly them,” he said.

Buchanan hit one of his lowest points when his father passed away while he was pursuing the instrument course in 2018.

“To think that one of the key reasons for my undying love for aviation was gone in the blink of an eye was definitely a lot to swallow. Luckily, my instructor at the time was very understanding and told me to take as much time as I needed to grieve and compartmentalise before I came back to fly,” he recounted.

In short order, he will be pursuing a master’s degree in aerospace and aviation management to broaden his scope in the industry and make himself more marketable.

His ultimate goal, inspired by those trips as a toddler, is to become a pilot for Delta Air Lines and grow within the company.

To young Jamaicans, he said: “Not everything will be handed to you on a silver platter, but with patience, hard work, good time-management skills, and most of all, an excellent attitude towards challenges, anyone can withstand the test of time.”

He hopes to take to the skies in 2021 on his 31st flight as a commercial pilot.