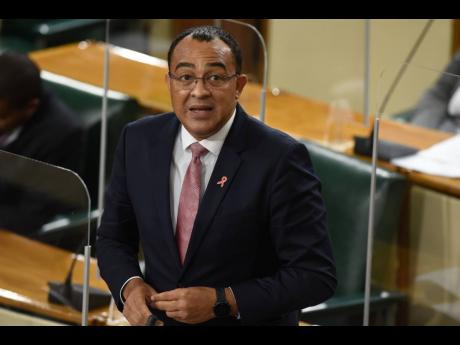 Minister of Health and Wellness Dr Christopher Tufton says more than 16 per cent of Jamaica’s population could be vaccinated against COVID-19 this year, if efforts to secure safe vaccines outside of the COVAX Facility materialise.

The Government has targeted some 480,000 Jamaicans (16 per cent) to be vaccinated in 2021 under the COVAX Facility.

“The idea is to see to what extent any sort of government-to-government arrangement would allow us access to some of their vaccines coming out of those countries where manufacturing takes place,” Tufton told The Gleaner last evening.

The minister announced in the House of Representatives yesterday that the Jamaican Government would be seeking to obtain safe vaccines from China, India and Cuba to protect the population from the virus.

He said that the Government’s efforts to access more vaccines would not take away from Jamaica’s commitment to obtain vaccines from the COVAX Facility.

Tufton said the Government was looking at the possibility of getting vaccines from other sources before April when the vaccines from the COVAX Facility are expected to arrive in the island.

He noted that herd immunity required about 60 per cent of the population to be vaccinated.

While the administration engages China, India and Cuba to secure more vaccines, Tufton said his ministry would maintain a rigorous process of review for all medical supplies that are administered locally.

He insisted that any vaccines to be used locally would have to be granted authorisation for emergency use for prevention of COVID-19 by the United States Food and Drug Administration, Health Canada and the European Medicines Agency.

At present, China has four vaccines near approval stage while India has two vaccines that are at the final stages of approval.

At the same time, Cuba has four vaccines, one of which is now going through phase-three trials.

Late last year, Tufton had told The Sunday Gleaner that the Government was not pursuing any Cuban vaccine as an option for Jamaicans.

The health and wellness minister also disclosed that the first batch of vaccines to be obtained through the COVAX Facility, which are due in April 2021, has been increased from one per cent to five per cent.

Under the first phase of the programme, priority will be given to the following groups:

· Members of parliament, senators, municipal corporation representatives, and other senior members of the State.

· Residents and staff of nursing homes