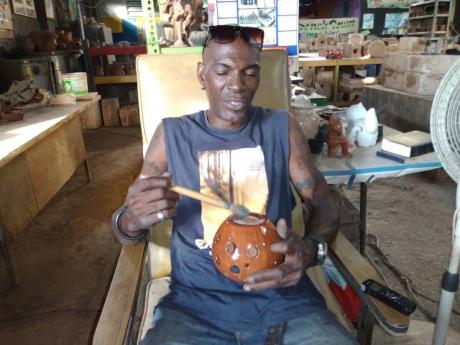 Photo by Jason Cross
Garfield Williams says the switched from importing white clay to using local clay to create his pieces has been paying off. 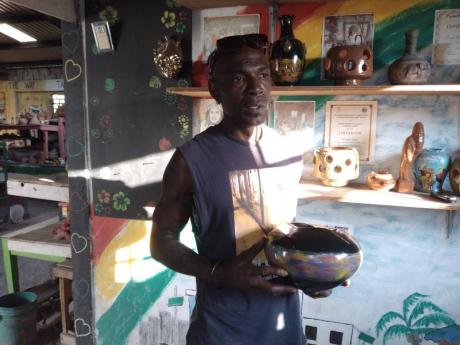 Photo by Jason Cross
Trench Town artisan Garfield Williams discusses the process behind making one of his creations. 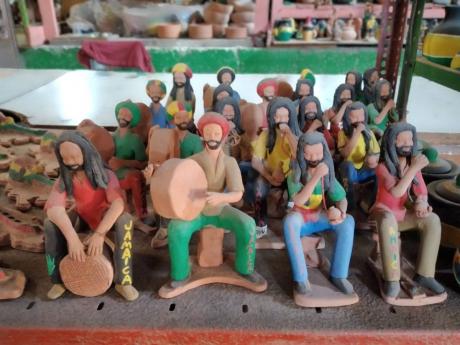 A “mystical” return is how Garfield Williams has described his transition back to his birthplace, Trench Town, to set up the Trench Town Art and Ceramic Centre 12 years ago. Through the centre, he has taught and trained more than 500 youngsters to fashion fine art from clay and other natural elements.

The community is sometimes crime-plagued and Williams said the centre plays its role as a rose among thorns.

He shared with The Gleaner from the centre’s upper First Street location that he left Trench Town at age six in 1972 and had scant memories of those days. After returning to Jamaica from Canada, he explained how he was struggling to make a name in Balaclava, St Elizabeth, in the art and ceramics sector and was also spending too much money importing raw materials.

He credited the Jamaica Business Development Corporation (JBDC) for forcing his hand to move to Kingston. They also provided him with contacts for local suppliers of cheaper clay and other materials so he could make better profits.

But moving to Kingston meant he had to find a base, and while cleaning up a space in Greenwich Farm, St Andrew, a proposal from a long-time friend to move to Trench Town brought him home again.

“I returned to Trench Town in 2010, mystically. This is where I am from, but I didn’t know, because I was young. While I was away in Toronto, I learned this craft that I am projecting right now. I basically learned it through my mom. I was always a lover of art, but my mother gave me inspiration and an avenue for me to see that I could come back to Jamaica and establish something,” he said.

“JBDC asked me if I would like to come to Kingston, because there would be a whole lot of avenues and opportunities for what I was actually doing. I was working with the Balaclava High School, and I dealt with a couple of other schools in the Manchester area through this whole ceramic and craft thing. I noticed that I had an opportunity to showcase that and to make kids have somewhere to go after school and learn something they can project in the future,” added Williams. “A lot of people have craft as something that is low-scale and isn’t on the up and up in some sense. But there is an avenue for what we are doing for the young people and the future of Jamaica, in some sense.”

Over the 12 years, Williams said he has hosted workshops at the centre with women’s groups and teams from Pennsylvania and New York in the United States, as well as persons from Montreal, Canada, who participated in and enjoyed “the whole clay experience”.

“It’s just one big joy and vibes of having different diaspora come into Trench Town, and we are able to spread love through craft and art,” said Williams, although COVID-19 has put such sessions on pause.

“I was importing white clay into Jamaica and supplying customers that love that look, but it wasn’t profitable. The right thing to do was to stop importing clay and use local clay,” he said. “It is a bonus, not only to come back to my place of birth ... , but also meeting other persons in the craft that used the clay to make flowerpots and almost anything. They have been using the clay beneath their feet for many years.”

Williams also carves miniature wooden figures of Rastamen with chalices and ordinary Jamaicans playing dominoes, which attract a $2,000 price tag. For the same price, one can also get a pen/pencil and incense holder. For $3,500, persons can go home with beautifully carved and moulded vases and candleholders.

“I just create out of my head. I just create it and just spend time with the piece. I put my own colour schemes to almost all of these products. This vase right here is actually in African style,” he said, pointing to one of his creations.

“This, for example, is a candle holder which gives a nice glow in a very dark room and it is ‘friendly’, in the sense that the candle can’t turn over and catch the place afire,” he said of another.