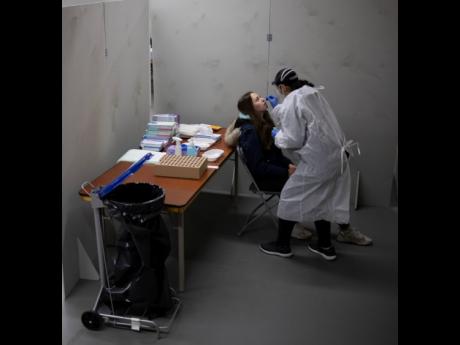 Unauthorised medical practitioners exploiting demand for COVID-19 tests locally have apparently expanded their reach into the favoured polymerase chain reaction (PCR) market, asking no verification of identity from patients, many of whom are preparing to travel overseas.

This means a traveller who has tested positive for COVID-19 can have a PCR test done by someone who is negative, using the traveller’s name. That certificate bearing the negative result and the true traveller’s information can then be presented to overseas authorities as proof of a negative COVID-19 status.

In a follow up to last week’s Sunday Gleaner probe into the underground antigen testing market, later in the week this reporter was again able to use a fake name and other credentials to conduct a PCR test and obtain a COVID-19 clearance certificate for travel to the US.

This time, the unauthorised testing facility was located at the rear of a popular medical complex on Cunningham Avenue in St Andrew, and the test cost $13,600 – much cheaper than the $20,000 to $22,000 price tag at the government-approved entities.

The development threatens the viability of local and international travel restrictions to curtail the deadly COVID-19 virus as more countries are requesting PCR tests from visitors from Jamaica.

It also raises critical questions about the validity of COVID-19 certificates required for travel to countries from Jamaica; and most important for Jamaicans, it poses serious safety concerns regarding local administration of the tests, especially since Government must partner with the Pan American Health Organization (PAHO) to train and certify local staff and testing sites.

The name of the medical institution visited has been withheld, but our news team has confirmed that it is not among the entities approved by the Ministry of Health (MOH) to conduct COVID-19 tests. Last Wednesday, appointments and payments to the ‘consultancy firm’ were limited to WhatsApp messages and bank account transfers.

Unlike the lengthy wait reported by visitors at some state facilities, this entity was able to return results within two days, but only after swabs were said to be analysed and results returned from The University of the West Indies’ Department of Microbiology.

Last Friday, this reporter was emailed a virology report declaring a negative COVID-19 status. On it was the fake name submitted, the University of the West Indies department’s letterhead and authorisation by a medical microbiologist at the institution.

“Unfortunately, no [cash payments]. Because of the nature of the tests, only you and the doctor will be in the testing suite and we try to limit handling the sample and any other items,” explained a representative by WhatsApp in response to this patient’s queries last week. “No, an ID is not required.”

An hour later, the test was conducted by a practitioner wearing personal protective gear inside a small room at the facility.

In brief, pretest chatter, he explained: “The test is only cheap now. The price will soon go up ... because now you are only paying for consultation and transportation to the lab.”

In a Sunday Gleaner exposé last week, Health Minister Dr Christopher Tufton warned that unauthorised testing institutions – some of which fail to report positive cases to the authorities – “impact the availability and accuracy of data for planning, particularly for a new public threat like COVID-19”, and asked unscrupulous practitioners and their customers to desist from the practice.

Asked whether verification of identification by way of a passport or driver’s licence is a requirement at authorised PCR facilities Friday, Tufton answered in the affirmative, telling The Sunday Gleaner that it is necessary as the ministry “needs to know who to follow up”.

When quizzed about authorised labs, in this case, UWI, processing samples collected by outside entities, the health minister redirected queries to Dr Carl Bruce, chief of medical staff at the University Hospital of the West Indies.

When contacted, Bruce explained that initially, last year, the UWI laboratory charged for PCR tests, but explained that that was later changed and PCR tests have been offered without charge since Jamaica entered the community spread stage of the pandemic.

Since then, he noted, samples have been collected and taken to The UWI for analysis by entities all across the island.

“There are medical facilities right now that will charge you for consultation and for transport of the swab, etcetera ... and they send the swabs to us and we do it for free,” Bruce explained.

“Suppose a hotel has a visitor who is stranded and needs to go back somewhere, the hotel will send a swab to us. We get from diplomats all the time at UWI. They will actually send the swabs to us,” he continued, arguing that this puts less pressure on The UWI.

“The tests come from all over ... . No facility is authorised, once you have somebody who meets the case definition or the travel definition. In other words, you could send me a sample from The Gleaner if you have the facilities. The Gleaner can charge you for the facilities, but I’m giving you the test for free.”

When asked about a fake name being used on result certificates issued by The UWI for travel, Bruce said: “That is possible, because we have no way to verify identity. There would have to be a way for UWI to verify the authenticity of the name provided.

“We can do the test with the name that you give us for the purpose of the test but it is very challenging because we have no verification system.”

Last week, Opposition Spokesperson on Health Dr Morais Guy was cautious in endorsing the Government’s proposed National Identification System (NIDS), as he accepted the implications of inadequate verification when it comes to COVID-19 testing.

“I don’t want to play into the hands of the Government now in terms of NIDS, but the truth be told, even if you go to a registered medical doctor who operates a reputable service, the reality is that you are not asked for any information or identity check. You basically go in as who you are; your address and date of birth is given as such, and it is recorded as the patient,” he said.

“So until there is a system where either all laboratories – government or otherwise – require an ID, then there will always be the possibility of people going under assumed names to do things. So that particular part, although it is cause for concern for this particular test, will need more elaboration as we go forward,” admitted Guy.

In the meantime, it is still unclear what sanctions, if any, are to be taken by the MOH against medical practitioners who engage in the unauthorised COVID-19 antigen and PCR testing or whether the MOH is trying to identify and shut down these unauthorised sites.

This might be good news for some Jamaicans, however, as the UWI looks to phase out free testing for some members of the public.

“The requests have just ballooned out of the blue because of these new [travel] regulations. So we are going to have to go back to trying to retrieve the cost of the reagents and the kits that are used to do the test. I don’t think that we can afford the amount of requests that we have been getting in the last few days,” explained Bruce.