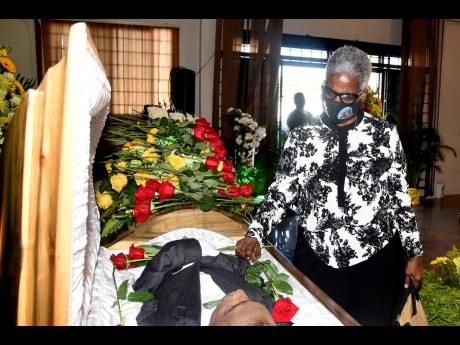 The son of shipping magnate Harriat Pershad Maragh yesterday gave a peek into the mind of a man who had taken bold steps to reshape how Jamaica’s shipping industry operated for decades.

Paying tribute to his father during a funeral at Roman’s Funeral Home on Dunrobin Avenue in St Andrew, Ryan said the elder Maragh, who passed away on January 3, had true love for Jamaica which was never diminished, even when Ryan thought otherwise and sought opportunities in the US.

Maragh, the chairman and chief executive officer of Lannaman & Morris Shipping since 1997, was hailed as a patriot who had given his all to Jamaica in his 71 years.

Speaking at the service, which was attended by few mourners, given the tight COVID-19 containment restrictions imposed by the Government, Ryan said Maragh was the best father.

“His love for me never failed,” Ryan stated with his mother, Charmaine, by his side as he became overwhelmed with emotions.

His sister, Raquel, also sobbed as she nodded in agreement.

Charmaine said she took care of her husband and suggested that other wives do the same.

“That is our reasonable service as women unto God. We are not perfect, but when you pray, there is power in prayer,” she said.

Shipping Association of Jamaica (SAJ) President William Brown broke down as he paid tribute to the man he affectionately called ‘Chief’.

“In my last words, I will say, ‘Walk good, my friend. Rest well. … I will see you on the other side some day, but not yet. Not yet, Chief. I still have this mantle that you have placed on my shoulder to carry’,” Brown said.

“I know I will never fill his shoes, but I hope one day they will place mine beside his, in twin … in his honour as we were, for the better part of two decades, twinned, as there is always ‘where Harry is, there somewhere is William’,” Brown, managing director of Lannaman & Morris, tearfully stated.

Up to the time of his passing, Maragh continued to be involved in all aspects of the operations in the Lannaman & Morris Group of Companies – Metro Investments (property and trading), Seafreight Jamaica (shipping agency), Lannaman & Morris Shipping Limited (agent for Evergreen Shipping Line), Carnival Cruise Line, Holland America and Norway Cruise Line.

Maragh, a former SAJ president himself, was also chairman of the Kingston Port Workers Superannuation Fund, a post he had held since 2003. He was also a director of Express Catering and Margaritaville Turks & Caicos.