DEADLY PARTY-CRASHER - Driver in Portmore triple tragedy was tipsy, warned to slow down 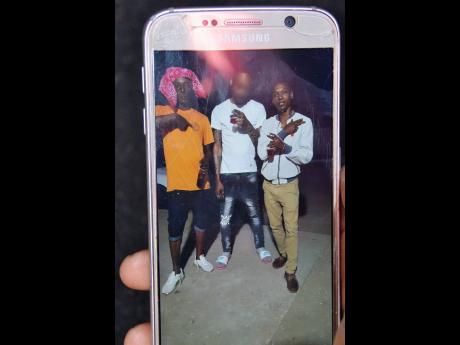 ERROL CROSBY/PHOTOGRAPHER
A survivor of the Portmore toll highway crash shows a photo of Jonoi Lewis (right) and another man (left) who perished Sunday morning. 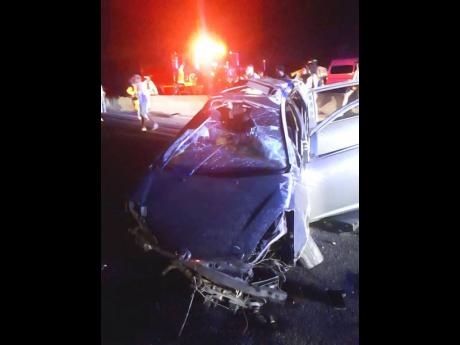 Contributed
A photo of the wrecked Toyota Wish motor car in which three persons perished on the Portmore toll highway on Sunday. 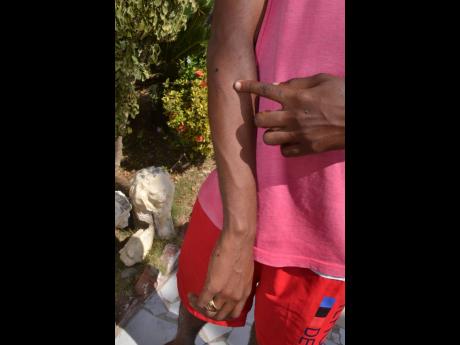 The driver of the ill-fated Toyota Wish motor car that flipped multiple times, killing three persons aboard, had been warned by friends that he was on the verge of drunkenness as the group went on a turbo-charged night of revelry and party-hopping in breach of a 10 p.m. national curfew on Saturday.

The tragedy that unfolded on the Portmore toll road around 1 a.m. on Sunday was an ominous conclusion, said one of the survivors, who rues not having pressed further to counter the stubborness and bravado of 34-year-old Jonoi Lewis, the driver.

Nicholas Scaffe, 24, who sustained bruises to his arms, told The Gleaner that the friends had planned to leave Portmore for an hour at most. But intoxicated by the elixir of machismo and stout, rum, Campari, and high-priced Hennessy, the group of seven went on a party-hopping craze. Parties are banned under the coronavirus-linked Disaster Risk Management Act.

Besides Lewis, the other dead persons have since been identified as Ricky ‘Chip Chip’ Gordon; and another man known only by his alias ‘Rygin King’ (not the well-known local entertainer).

“They are all my friends, close friend dem, me and dem par. Three dead! Oh, God! Mi can’t stop bawl for my friend dem,” said Scaffe in a sombre tone. “Mi feel bad ‘cause all we a say, if him did just listen, this wouldn’t happen.”

Looking dazed and still reeling from what he said was a nagging headache, Scaffe said he wished things had gone differently.

He recounted how the partygoers visited Tivoli Gardens in west Kingston before moving on to Waterhouse.

Lewis was observed to be ‘nice’ - Jamaican vernacular for tipsiness, just short of becoming stone drunk.

“We say, ‘All right, stop the drinking! You say we a go party likkle more.”

The Gleaner understands that the keys to the vehicle were confiscated on at least two occasions, but the driver was reportedly adamant that he was capable of driving.

“Mi say, ‘Bredda, me nah mek yuh drive!’ Mi tek it from him and give the other youth that also died ‘cause he was sober.

As the Toyota Wish roared down the highway, the vehicle began to swerve, said Scaffe. He said the vehicle crashed into a median and flipped, perhaps, six times.

“I was at the extreme back. One of the deceased fly from the middle seat to the back in my lap, blood me up. When I looked at him, he had no head top,” Scaffe told The Gleaner.

The females among the group sustained head injuries and were rushed to Kingston Public Hospital.

Scaffe recalled that he was conscious after the crash and eventually assisted the other survivors.

He and the other male survivor were treated at the Spanish Town Hospital and released.

Sharene Gayle, Lewis’ cousin, was among relatives and friends who gathered at the family home on Sunday.

“He is a fun person, very jovial. A friendly person that is always there for other persons no matter what,” she said of Lewis. “He will have his last and give his friends.”

The nation recorded 419 crash deaths between January 1 and December 30 last year – 21 fewer than occurred in 2019. That statistical fall, however, may offer cold comfort to traffic watchers, as islandwide coronavirus curfews were maintained for three-quarters of 2020.