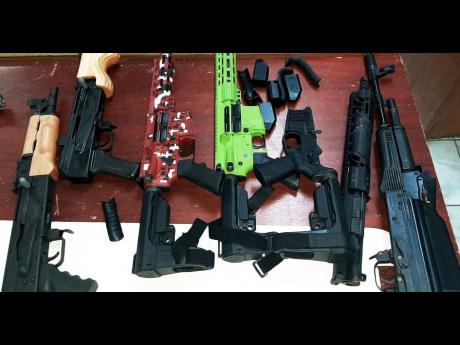 File
Guns and ammunition were discovered in a fridge at a Montego Bay wharf on Monday, January 18. This photo shows assault rifles that were among 19 illegal guns found at another wharf in MoBay last week.

Contraband and customs officers unveiled an elaborate ruse to smuggle guns and ammunition in a refrigerator through a Montego Bay wharf as a police campaign to crack down on illegal weapons reaped rewards on Monday.

Three high-powered rifles, two 9mm handguns, and more than 100 rounds of ammo were discovered within the panels of the refrigerator by the Area One Contraband Enforcement Team, The Gleaner understands.

Reports by the police are that between 8 a.m. and 9 a.m. on Monday, customs officers were undertaking routine checks of barrels and other freight at a Freeport wharf when they detected irregularities with the refrigerator.

Area One sleuths dismantled the appliance and discovered the concealed contraband.

A senior police source told The Gleaner that the refrigerator was shipped from an address in the United States and destined for an undisclosed location in Montego Bay.

The seizure comes eight days after a major weapons and ammunition seizure at another wharf at Freeport where 19 illegal fireams and more than 470 assorted rounds were seized.

Last week’s seizure occurred shortly after 6 p.m. when customs officers became suspicious of a barrel shipped from the United States to an address in Falmouth, Trelawny.

The officers detected irregularities with the barrel, which purportedly contained toiletries and food, and called in the police.

A search of the barrel resulted in the discovery of six high-powered rifles and 13 handguns.

The police believe that their Get the Guns Campaign is crucial to stemming the flow of the tools of murder in the north Caribbean country, which recorded more than 1,300 killings in 2020.