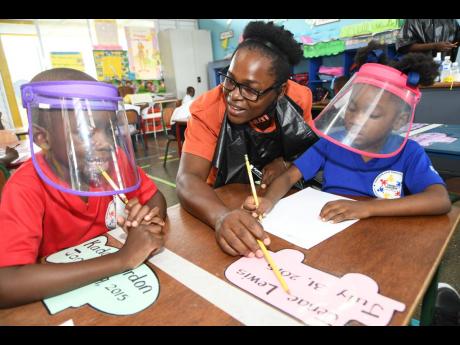 Three billion dollars is being spent to vaccinate 16 per cent of the population against COVID-19, and the bill will climb with the Government giving early signals that the medicine could be introduced into the regular inoculation schedule for the population.

The COVAX Facility is designed to accelerate equitable access by countries globally to appropriate, safe, and efficacious COVID-19 vaccines.

With concern growing that poorer countries are being crowded out of the vaccine market by wealthy nations, it was announced that just under 300,000 doses are scheduled to arrive in the island on April 21 by air transport.

That will be enough for five per cent of the population.

Those are to be used to commence phase one of the national vaccination programme.

Healthcare workers, police, soldiers, correctional officers, customs and immigration officers, parliamentarians, persons in infirmaries, and the elderly are at the top of the list to receive their jabs first.

Each person will be expected to receive two doses of vaccines weeks apart.

“This phase of the response to COVID-19 is a critical phase. We believe it is the phase that will see the beginning of the end of COVID-19 as a primary threat – not that it will go away – but as a primary threat not just to our population but to the world,” Tufton contended in his address to Parliament on Tuesday.

Health centres are also being contemplated to be used as vaccination sites as well.

Tufton told Parliament on Tuesday that current cold storage at the central and parish level is limited.

“Given the anticipated overall increase in the number of vaccines – approximately one million – additional storage capacity will be required.

“Each parish will need at least one additional vaccine refrigeration facility to accommodate COVID-19 vaccine and at the central store, an additional 10 to 20 freezers will be required and put in place,” Tufton stated.

But trouble for the Government is on the horizon.

PAHO/WHO has projected only a 35 per cent uptake of the COVID-19 vaccine in Jamaica, the lowest of the countries for which forecasting was done in the Americas.

The health ministry has estimated 60 per cent compliance among healthcare personnel, the police, the JDF, the correctional services as priority groups. The highest take-up is expected to be among parliamentarians and their senior staff at 90 per cent.

“Acceptance and uptake for the approval of COVID-19 vaccine in Jamaica is critical to slowing the spread of the infection, reducing mortality as well as rebuilding the economy,” Tufton stated.

“We know, however, that introducing a new vaccine, especially through new delivery methods, may be challenging due to public mistrust and misinformation.”

He, however, said there was a plan to educate the public to counter the misinformation and the distrust the wider populace had in the vaccine.

Opposition Spokesman on Health Dr Morais Guy questioned the need for persons who have received the vaccination to still undertake quarantine as announced by Tufton.

But Tufton insisted that it was prudent to retain the quarantine protocols because of the relative infancy of coronavirus vaccination.

Other doses are scheduled to arrive in the island on July 21 and December 21.

By the end of the period, 16 per cent of the population should be vaccinated through COVAX, completing phase one.

Tufton said another 16 per cent of the population will be targeted in phase two, but uncertainties surrounding vaccine distribution and other factors have prevented the ministry from offering more details.

However, Opposition Leader Mark Golding was not pleased with the targets, given that it was widely accepted that 60 per cent vaccine take-up would be the lowest bar to attain herd immunity.

“... I think that is unsatisfactory. We must aim significantly higher than that,” said Golding.

“Jamaica, in my opinion, should do its utmost to source sufficient doses to immunise our population this year at a level that would achieve herd immunity this year.”

But Tufton said that while he acknowledged the “anxiety” of the Opposition, it was the market that had dealt Jamaica a bad hand.

“We are faced with a practical scenario. We can’t access what is not available,” he said.