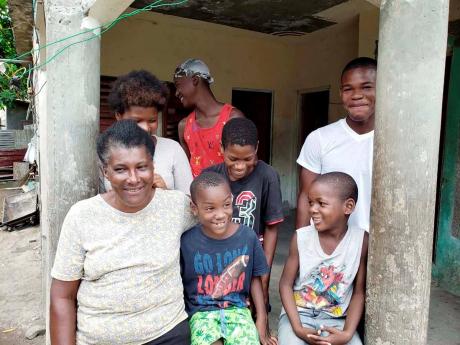 Photo by Shanna Monteith
Edwinna Nelson-Thomas and some of the children welcome at her home in Logwood, St Thomas. 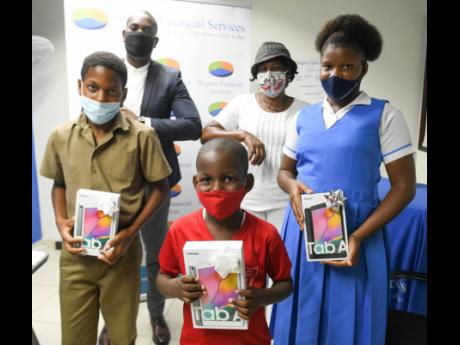 Passion for children has spurred Edwinna Nelson-Thomas to open the doors of her home to a host of happy feet in Logwood, St Thomas.

The 58-year-old, who has been lauded for her kindness, currently cares for approximately 10 children during the days, six of whom live with her. At least three of them are not relatives.

Affectionately called ‘Grandma’ by young and old, the mother of eight shared that most of her biological children are now living on their own.

Her penchant for taking children under wing was sparked while living in Newland where she was moved to intervene when she saw a little girl being mistreated by her mother and sister.

One night the child vowed never to return home.

“So I told her to come home with me. When I spoke with the mother and sister, they said, ‘Mek she gwaan bout her business,’ and I said, ‘No problem’,” Nelson-Thomas told The Gleaner.

That act of benevolence lit the flame of love that caused her to open her arms to many other children.

The gentle woman shared another special case where a baby whom she initially cared for was later abandoned by the mother.

“When the baby’s grandmother came, I was crying and explained to her that it was not that I didn’t want to keep him, but I couldn’t afford to feed him,” Nelson-Thomas said.

“She asked if she provided food, if I would keep the baby, and I said ‘yes’. She gave me food one time and that was it,” she said, adding that she received help from community members to feed the infant.

Twelve years later and Nelson-Thomas describes the relationship between her and her adopted son as beautiful.

“He’s loving and helpful. If I can’t move mi foot, him first a catch wood fire, put on water, put salt in it and come and massage them. He doesn’t give my two girls the chance to do it,” she said.

Since suffering a fall seven years ago, her feet have never been quite the same.

Before that accident, she would operate a shop as well as a kiln for the sale of coal. She now grows and sells bananas.

Nelson-Thomas said that she sometimes sleeps on the ground to accommodate the house full of children.

“When I cook and share, I have to go around each plate and take out a little so I can eat, too,” she said, explaining how she scrimped and saved to maintain the happy household.

The selfless woman was moved to tears as one mother shared her appreciation.

“Grandma is God’s creation of an angel. You can depend on her and she’s always on her feet, even when we tell her to sit down and let us get it done for her,” said Denise Williams-Jones.

“My children love her and she has always been there for them whenever I have work. She is everybody’s mother.”

Williams-Jones was so touched by Nelson-Thomas’ philanthropy that she reached out to Regions Financial Services to assist in providing three tablets to facilitate online classes for the children.

‘Grandma’ told The Gleaner that the tablets, sourced through a Christmas wish promotion, have helped the children take turns accessing their assignments.

She shyly admitted that additional devices are needed, especially for those attending high school, but remains grateful for the assistance she has already received.