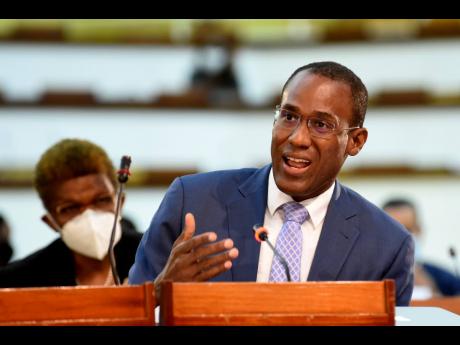 The Holness administration has rejigged expenditure to help bolster its capacity to fight the coronavirus outbreak as Finance Minister Dr Nigel Clarke unveiled a $3.5-billion cut for the 2020-2021 fiscal year when he tabled the third Supplementary Estimates of Expenditure in Parliament on Tuesday.

The money allocated to day-to-day, recurrent spending has been cut by a total of $2 billion, while the total amount to be spent on major projects and one-off acquisitions, capital expenditure, will be cut by $1.5 billion.

Clarke said that the reduction was a mix of expenditure cuts, shifting of payments, and expenditure increases to ensure a continued robust COVID-19 response.

Jamaica, as at Monday, recorded 14,419 coronavirus cases and 329 deaths as the country continues to buckle under economic stress in a balancing act to contain the disease.

On the recurrent side, the Ministry of Education, Youth and Information has come in for the biggest cut at just under $1.6 billion. This is driven by a $1-billion cut in the allocation for information and communications technology services. The Government’s welfare platform, the Programme of Advancement Through Health and Education, has also been trimmed by nearly one-third.

This is followed by the Office of the Prime Minister (OPM) at just under $1 billion.

The allocation for the holding of elections has been slashed by $912 million. The recurrent budget for the Forestry Department is being slashed in half, moving from a budgeted $1.02 billion to $487.2 million.

At the same time, the Ministry of Science, Energy and Technology is getting $1.72 billion more for recurrent expenditure while the Ministry of Health & Wellness will receive an additional $1.3 billion to assist with the COVID-19 pandemic effort.

The Police Department will get just under a half billion dollars more with its recurrent increased from $41.8 billion to $42.285 billion, while the Ministry of Economic Growth and Job Creation will benefit from an injection of $166 million.

On the capital side, the $1.5 billion in cuts are spread among the various ministries.

The biggest capital budget cut is at the Ministry of Local Government and Rural Development, totalling $809.85 million, moving from $$1.54 billion down to $735.7 million.

Government is slashing the capital budget for acquisition of fixed assets by $747 million at the local government ministry.

The finance minister said that the payment for the acquisition of trucks for the ministry has been shifted to financial year 2021-2022.

The Ministry of Agriculture and Fisheries is coming in for the second largest cut, totalling $360 million. The capital budget of the Ministry of Science, Energy and Technology will suffer a $240-million chop, driven by a cut in the Energy Management and Efficiency Programme, down from $401.7 million to $134.7 million.

Meanwhile, the OPM gets an increased capital budget, which is moving from $4.04 billion to $$4.43 billion, a $388.34-million increase. An increase in the Capital Allocation under the Poverty Reduction Programme IV and the implementation of the controversial National Identification System are the main drivers for the increase at the OPM.

The estimates will be reviewed by the Public Administration and Appropriations Committee of Parliament on Thursday.

Editor's note: An earlier subheading suggested that the procurement of fire trucks was being scratched. While payment has been deferred to the next fiscal year, delivery of the vehicles has not been postponed.