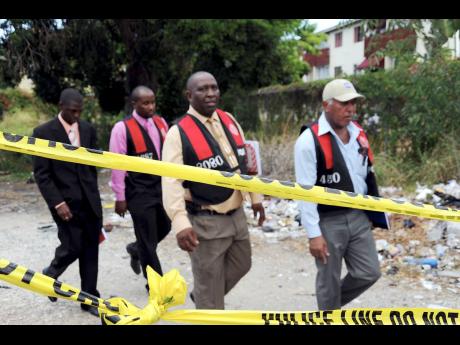 File
Police investigators at a murder scene on Trafalgar Road in St Andrew in June 2012. 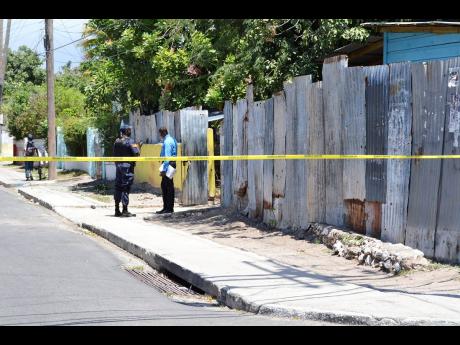 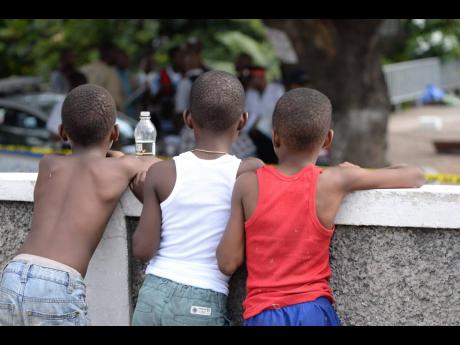 File
File These youngsters try to get a glimpse of the crime scene at Crystal Towers apartment complex in St Andrew, where the body of a woman was discovered on December 10, 2016. Dr Herbert Gayle noted that women were also victims of crime, with more than 90 per cent of domestic abuse victims being female. 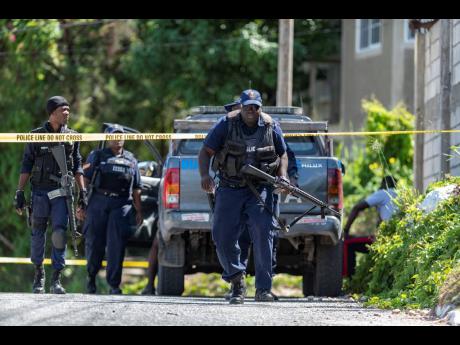 File
Police officers at a crime scene in Goldsmith Villa, located in August Town, St Andrew, where one person was shot dead and another two injured in 2019.
1
2
3
4

Marcia Salmon* took Spoiler* into the home she shares with her two children in her community in a rural area shortly after they crossed paths.

She had met him in a neighbouring parish, when she accompanied a friend to visit relatives. Two weeks after meeting, she brought him home.

Marcia does not know his correct name. Neither does she know any of his family members or exactly where he is from.

In the early weeks of his arrival, Spoiler was bed-bound and housebound, and Marcia supplied his every need. Slowly, he began to emerge with her in the community and became known as ‘Marcia Man’. He has no known skills and lives off the remittances she frequently receives from the father of her children, aged six and four, who is overseas.

Her two older children, aged 11 and eight, live with their father in another part of the island.

Her sister Betty* is worried for Marcia’s two young children. Her gut feeling tells her they are in trouble, but she has said nothing to Marcia.

No one can point a finger at any wrongdoing by ‘Marcia Man’, but a community elder said dogs in the vicinity of the house he is staying are suddenly “dying mysteriously”.

Now, some community members have theorised that Spoiler facilitated the arrival of one of the island’s most wanted men to the parish.

That man was killed by the police months later. The police say he was part of a criminal network operating in a number of southern parishes.

The community elder challenged The Sunday Gleaner to what he said was “simple maths”.

“You see Marcia situation, multiply that by one in very rural community in Jamaica. Remember, Spoiler have him friends, and if him find a community where him can cool out, him going to tell him friends who involved just like him. If that happens in every community, you know how many criminals you start planting in communities such as this?” he calculated.

[Heading] ... ‘They are willing participants in this crime wave’

Social anthropologist Dr Herbert Gayle, in findings presented in 2018 as part of a two-year study which tracked the ‘Reasons Why Young Women Die’ in Jamaica, found that women were not all saints.

“It may be surprising to some that women are playing serious roles in the planning of violence. We found that eight per cent are involved in this fashion. They are behind the scenes and have been effective,” Gayle said during the presentation to launch the research findings.

The study also found that 32 per cent of females lit the fire that triggered conflicts in crime-ridden communities across the country and which often escalated into full-blown wars in communities, according to Gayle.

Gender and advocate groups have painted women as victims in nearly all circumstances.

However, a respected Manchester clergyman has estimated women’s involvement in crime in Jamaica at 50 per cent, 18 per cent higher than Gayle’s findings.

While he has not done any studies, he said information he has gleaned from various groups suggested equal involvement, with women being part of the planning process and actively facilitating criminals, either by hiding them or benefiting financially from the spoils.

The women are also using their children to ‘spy’ on other community residents to provide information to criminal male associates, he added.

“The first thing you hear is how vulnerable women are and how they have to stay silent out of fear. We need to stop sorry for them, for most of them want what the men can give them in exchange for their silence. They are willing participants in this whole crime wave. But as you open your mouth and talk about the role of women in crime, especially from a man like me, you hear that it is sexist,” the clergyman told The Sunday Gleaner last week.

He believes the Government should continue its male-focused assault on crime, but seek to empower more women. Such a plan will see crime figures go down significantly, he suggested.

To bolster his views that women could be just as brutal as men, he pointed to the near-death beating late last year of 17-year-old Kaylan Dowdie, who was reportedly attacked by five women at a party being held in breach of the Disaster Risk Management Act.

The teen was placed on life support at the University Hospital of the West Indies. Her current condition is unknown.

Gayle also noted that women were also victims of violence, making up more than 90 per cent of victims of domestic abuse. The end result, he said, often see other relatives of the woman becoming victims as well.

He said criminals often target women, children and the elderly to enforce the fear factor and to instigate conflicts in the Jamaican context, which he said drew parallels in Belize.

According to him, women were once respected and even protected from violence, and even the most hardened contract killers were not open to killing females. It is no longer so, bemoaned Gayle.

Last weekend, that cruelty was on full display in St James with the murder of two persons in Quarry, including 76-year-old Estriana Wilson, who was shot dead as she sat at her gate despite pleading for her life. It was weekend in which 25 persons were murdered islandwide.

[Heading] Jamaica not short of recommendations to fix crime

An upsurge in crime in the Allman Town area of Kingston Central has led Imani Duncan-Price, the People’s National Party’s caretaker for the constituency, to call for a zone of special operations to restore calm.

She noted the economic link women have with dangerous men.

“Chronic poverty, chronic lack of opportunity. People have to eat and live. And when you talk to a hungry young boy or girl, it is painful. It is really painful. So women, who used to be a kind of line between good and bad, more and more you find them being with men and supporting them purely for economic reasons,” she stated.

“That is how bad it is. And one of the negatives of the COVID pandemic in the informal sector is how much it has affected women. A lot of women would sell by school gates and would earn for their families, but when the schools closed, the opportunity to make a living dried up. And so I find persons now asking for support who would never normally come. So I am not surprised that more women have found themselves to be supportive of crime,” she posited.

Duncan-Price said the calls for the root of crime to be addressed have been long and sustained.

She referenced one of the most comprehensive reports which presented recommendations towards solving crime, done 28 years ago by retired Chief Justice Lensley Wolfe.

“Jamaica has been plagued with increased levels of crime over the last 30 to 40 years and what we keep on doing is instating measures of suppression to try and lock people down – the states of emergency and other such measures. Those things are important as measures in the crime-fixing tool kit to shock you for a reduction in the short term, but it does not solve it in the long term in a sustainable way,” she told The Sunday Gleaner last Friday.

Weighing in on the issue, Senator Matthew Samuda, minister without portfolio in the Ministry of National Security, offered his response within the context of the 2019 Jamaica National Crime Victimisation Survey done by the Statistical Institute of Jamaica (STATIN), emphasising the Government’s commitment to the crime fight.

“According to the report, STATIN found that the majority of people, 90.3 per cent, felt safe at home, while inside a church was identified as the place the majority of individuals felt safest (97.5 per cent in urban areas and 98 per cent in rural Jamaica). The report also said nine out of every 10 people felt safe walking in their community during the day, with that falling to seven out of every 10 persons at night,” he said.

Despite the migration of criminals and the metaphor that is ‘Marcia Man’ and the multiplication provided by the elder, the report said persons felt safest in two rural parishes.