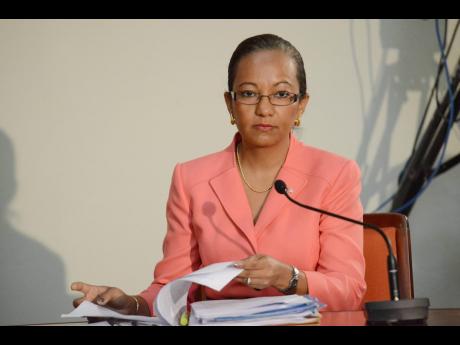 File
Permanent Secretary in the Ministry of Labour and Social Security, Colette Roberts-Risden.

Up to the period July 31, 2019 when the Audit Committee of the Ministry of Labour and Social Security (MLSS) presented its annual report to the ministry, the oversight body made adverse observations, including incorrect use of funds and lack of contracts with third parties involved in the disbursement of benefits.

The seven-member Audit Committee of the ministry, comprising professionals from government departments and agencies, was at pains to point out the lack of response from management to the findings from the ministry’s internal auditors.

The Auditor General’s Department (AuGD) highlighted in its annual report that the ministry “was yet to respond” to 60 issues of systemic weakness dating back to 2017.

A response from the MLSS to Parliament’s Public Accounts Committee (PAC) stated that “at no time was this list of 60 outstanding issues brought to the accounting officer’s attention”.

The accounting officer or permanent secretary at the ministry is Colette Roberts-Risden, who has held that position since 2015.

“Many of the issues mentioned in the report (Auditor General) relate to matters several years old that have been long addressed. There are, however, some instances when budget and human resource constraints impede the pace at which some things were or are being addressed,” the permanent secretary said.

However, the Audit Committee, in its annual report for the period ending March 2019, said, “There exist approximately 90 audit findings/observations that no response was provided, which covered the period June 2017 to September 2018.”

The Audit Committee, chaired by Kate Williams-Bertram, reported that the chief internal auditor at the ministry prepared a comprehensive summary and submitted it to the permanent secretary and the Audit Committee.

Williams-Bertram said that the committee continued to experience challenges by the lack of, or inadequate, submission of management responses to the internal audit findings. “There were instances where the audit reports were received and management responses were outstanding,” she said.

The Audit Committee reported that there were no improvements in the systems of internal controls within the ministry.

“The lack of management responses in the audit reports made it difficult to examine whether or not the recommendations of the internal audit team were implemented or whether management was in agreement with the findings,” the Williams-Bertram-led committee reported.

During a meeting of the PAC on Tuesday, Chairman Julian Robinson received permission from the committee to invite Williams-Bertram; Deborah Gardener, member of the audit committee representing the MLSS; and the ministry’s chief internal auditor to the next meeting on Tuesday.

He said the PAC could not properly examine the issues without the input of the representatives of the Audit Committee and chief internal auditor.

Roberts-Risden and other senior officials from the ministry will return next week to face questions from the oversight committee.

Juliet Holness, member of parliament for St Andrew East Rural and PAC member, said on Tuesday that she was concerned about “some of the information we have read in the auditor general’s report”.

She said the internal auditors must be present to address the issues.

· Incorrect use of funds and misclassification.

· Lack of contracts, with third parties involved in the disbursement of benefits to beneficiaries.

· Conflict with the purpose and application of benefits.

· Poor accounting for and control over valuables.