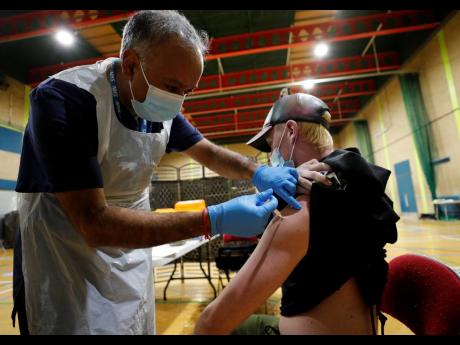 The $422-million budget approved for the communication campaign to bolster buy-in of the coronavirus vaccine could be crucial to a Jamaica Moves-scale crusade in marketing the life-saving jab. Jamaicans will not know until early next week which...

The $422-million budget approved for the communication campaign to bolster buy-in of the coronavirus vaccine could be crucial to a Jamaica Moves-scale crusade in marketing the life-saving jab.

Jamaicans will not know until early next week which company has been contracted to spearhead the marketing crusade, permanent secretary in the Ministry of Health and Wellness, Dunstan Bryan, told The Gleaner on Wednesday.

The tender was done through emergency contracting as the country prepares to receive its first batch of vaccines through the COVAX facility later this month.

The Government has faced criticism that it has not rolled out an aggressive marketing strategy to counter strong currents of vaccine resistance, particularly among the adult population.

Bryan declined to disclose the specific amount to be allocated to the company.

“By the end of this week, I believe the process will be finalised, and they will start working on Monday,” the permanent secretary said.

The ministry’s internal communications team will play a role.

The $422 million will be spent between now and year end, when it is expected that at least 16 per cent of the population, or at least 450,000 persons, will have been vaccinated.

Market Me, the marketing company that led the aggressive Jamaica Moves wellness campaign but became embroiled in controversy in 2020, is not being considered, Bryan revealed.

But the ministry’s marketing strategy will likely have to reprise the scope and intensity of the wellness campaign that helped make exercise and health buzzwords across the landscape.

Bryan said that the budget for the vaccine distribution through COVAX is approximately $3.2 billion. It was not immediately clear whether the marketing bill had been subsumed into the billion-dollar price tag.

Jamaica is set to receive between 146,400 and 249,600 doses of the AstraZeneca vaccine by mid- to late February 2021, two months ahead of the original timeline.

“We have a technical working group that has been working at this from October, and as you know, we have a very solid infrastructure around vaccination in country, and we will be enhancing that infrastructure,” Bryan said.

Messaging will prove crucial as the Government awaits global health authorities to give unanimous blessing for the elderly to receive the AstraZeneca jab.

“The Pfizer vaccine has already been authorised. It is ready for deployment. AstraZeneca vaccine has not been delivered because we are still working on the final reviews, and we understand that we will be finishing this within one or two weeks,” Barbosa told reporters at a press briefing.

Barbosa said that while regulator European Medicines Agency believed that persons older than 65 could be vaccinated based on current data, an assessment is still being done by WHO.

“All vaccines are welcomed to COVAX, but we can only say something about the vaccine after the conclusion of the assessment,” he said.

Barbosa said that the initial doses of vaccine are meant to reach at least 3.3 per cent of all the population within each country.

“This will allow these countries to vaccinate the most vulnerable population, health workers, and other social workers on the front line,” he said.

Although the Pfizer vaccine has been given full approval and will be distributed to some countries through COVAX, Barbosa said that they had only managed to secure just over a million doses.

“Based on what we call the immunogenicity – the response that they had found so far –the results appear encouraging, and the UK independent regulatory authority made a judgement that it was worth giving it to the elderly,” he said.

But Figueroa said he could not publicly comment on whether the vaccine should be administered to the elderly in Jamaica.

“The World Health Organization is still in the process of making their own assessment, and I cannot say anything further because I am on that WHO working group and we have to restrain ourselves from commenting on confidential data,” he said.

In a statement to Parliament on Tuesday, Health Minister Dr Christopher Tufton said that some 125,000 Jamaicans could receive vaccines by March.

“Among those to receive the vaccines are our front-line workers, including our nurses and doctors, and then to our vulnerable persons. Chief among those are persons 60 years and older,” he said.