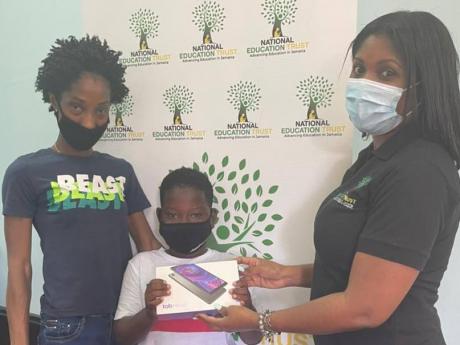 Contributed
From left: Moya Beckford looks on yesterday as her eight-year-old son, Nicholas Edwards, a student of the Spanish Town Primary School in St Catherine, receives a tablet from Latoya Harris, director of donor and partnership management at the National Education Trust.

Since a 2017 fire turned their lives upside down, Moya Beckford has been struggling, driven by the fear of failing her two children, eight-year-old Nicholas Edwards and 16-year-old Ashhail Samuels.

On the fateful night, Beckford said that she awoke about 3 a.m. to check if the fan was working as she was sweating profusely. To her shock, their dwelling was engulfed in flames.

“We couldn’t get fi really save nothing because to how the fire did really start spread,” she told The Gleaner yesterday.

All she could do was grab a few official documents as they were all stored in one place as she woke up her children and remove the gas cylinder from the burning one-bedroom apartment to prevent an explosion.

Since then, it has been a hard road to rebuilding for the 35-year-old single mother.

“We worry ‘bout it. We think about it. We cry. We nuh get no sufficient help, but we have life so we have to give thanks,” Beckford said.

Her daughter soon requested to live with relatives of her deceased father, while Beckford and Nicholas, who was only four at the time, were assisted by an older woman, who arranged for her to stay at an unoccupied home for the time being.

Family and friends aware of the fire pitched in to donate a few items of clothing.

Though thankful for the helping hands, Beckford revealed that she has really been quietly suffering, not wanting to complain too much.

After a year at the house offered to her, it was time to find somewhere else to lay her head as the owners were ready to inhabit their property.

The journey through those gates took her to a location off the Salt Pond main road in Spanish Town, which she said she “captured”, totally unaware of who the owner is.

“Mi deh here so now two years now. An elder man deh side a me weh me use fi him toilet [because] me have the youth,” she said.

Her stint in the overseas farm-work programme in 2019 enabled her to purchase a mattress – but no bed frame – and a refrigerator that has never been used because she has no electricity.

“Mi have an extension weh me stretch go over the elderly man side weh mi only use fi plug in waa likkle bulb,” she said.

During the torrential rains late last year, Beckford said that at one point, she and her son had to seek refuge from her flooded dwelling to shelter with an elderly woman for two nights.

Despite all the challenges, Beckford keeps pushing to support her daughter as much as she can and to provide for Nicholas, ensuring that he has food to eat and attends school regularly.

“I can’t give him nuff, but mi send him because school is good, and mi nuh wah have dem and mek dem come tun cruff, even though nothing nuh deh, but me haffi try fi push,” she said, adding that she sometimes go without food to ensure her children are comfortable.

Since The Gleaner published a photo of a dog hovering over Nicholas as he did his schoolwork this week, many persons have expressed the desire to help the family.

Nicholas, who would usually walk to someone else’s house to receive his schoolwork via WhatsApp, received a tablet with credit for data from the National Education Fund yesterday.

“I feel so great because him never have one, so love and respect because him get fi do him schoolwork and can have likkle fun, too,” Beckford said.