Boy stabbed over phone in hospital 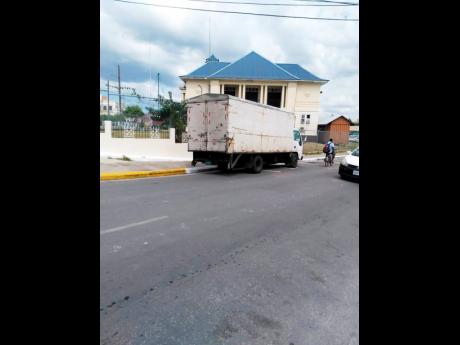 Photo by Hopeton Bucknor
The parked truck in which the teen was sitting when he was stabbed.

The Westmoreland police have launched a manhunt for a man who reportedly stabbed a minor outside the Westmoreland Parish Court in Savanna-la-Mar on Tuesday morning.

Investigators say they have not yet ascertained the suspect’s identity.

Reports are that the 14-year-old boy travelled with his dad in a motor truck to the court where the father had a pending case. The boy was left inside the truck, which was parked behind the courthouse.

A man armed with a knife crept up beside the truck and attempted to snatch the cell phone from his hand, but the boy resisted the robber, who stabbed him repeatedly.

Several eyewitnesses ran to his rescue, and the attacker dropped the knife on the roadway and fled the scene on foot.

The police and the boy’s father were called to the scene and the wounded child was taken to the Savanna-la-Mar Hospital, where he was admitted in serious condition.

Head of the Westmoreland police, Superintendent Robert Gordon, told The Gleaner that the child could have lost his life over a cell phone.

“This is another instance where persons need to be very vigilant and observe their surroundings,” Gordon said.

“Luckily, the child in question is sturdily built and he managed to fight off the robber, although he was seriously stabbed.”

The police intend to scour surveillance footage in the area to track the robber.