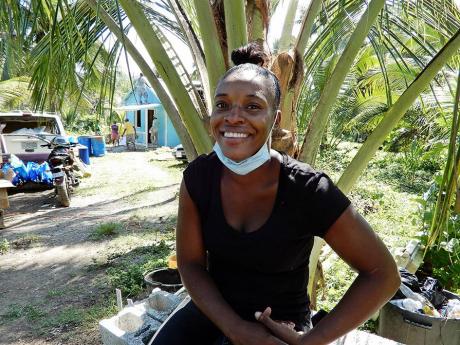 PHOTO BY CARL GILCHRIST
Afara Pink flashes a bright smile while workmen put the final touches on her new home. 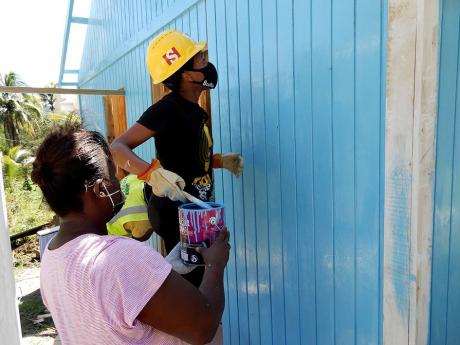 PHOTO BY CARL GILCHRIST
Two women combine efforts to complete the paint job on the new house for the Pink family in Fontabelle, St Mary, on Wednesday.
1
2

After leaving high school without a single pass, Afara Pink could have become just another statistic on the conveyor belt of poverty and despair.

But her steely will drove her to find a second wind after being blown off course.

It’s that never-say-die attitude that inspired the 24-year-old to rack up academic achievements and which appealed to charity Food For The Poor (FFP) to give her a helping hand.

Pink received one of 10 houses donated by Wisynco under its COVID-19 aid initiative to mark the 10th anniversary of energy drink Boom.

Workmen banded with members of the Greendale United Youth Fellowship in the rural district of Fontabelle, St Mary, to give the down-on-luck family a turn in fortunes.

Pink will share the facility with her younger sister, 19-year-old Ajara, and father, Barrington, who she describes as her rock.

For years, the three lived together in Port Maria in humble conditions that caused her to bare her soul.

“I had an outside bathroom and outside toilet. I had to do the dishes outside. It was a board structure, parted with several curtains inside,” she told The Gleaner.

“They saw my need and assisted me in getting a place to call home.”

Their new home has a bathroom, kitchen, two bedrooms, veranda, and a water tank – a world of difference from her former state.

Now a part-time teacher for students in the Career Advancement Programme, Pink recalls how her future once looked grim.

After attending Tacky High in Gayle for five years, she disappointedly left school in 2013 without sitting any Caribbean Secondary Education Certificate examinations “because of complications and problems”.

But she grabbed a second chance at Brimmervale High, scoring seven passes in two years.

She was emotional on Tuesday, even tearing up, as she remembered the long, hard road to academic success.

At Brimmervale, she racked up trophies for agricultural science and social studies, among other courses. Pink was also voted form monitor and named student representative for the school.

After Brimmervale, Pink’s academic light shone even brighter as she completed an associate degree in hospitality services at Moneague College last December.

At the same time, she was studying online and just finished her teaching degree in secondary education at Sam Sharpe Teachers’ College. And that’s not all.

She now attends Western Hospitality Institute in Negril, where she is reading for a bachelor’s degree in tourism management.

Describing herself as “jovial, outgoing, and adventurous” and a lover of the outdoors, she also has a knack for helping others and has participated in several corporate 5K runs to raise funds for charity.

“Everybody knows I like to help persons,” she told The Gleaner.

Brand manager for Boom Energy Drink, Keteisha McHugh, said that Wisynco’s decision to offer the needy 10 houses was an attempt to make a big statement in a milestone year.

“We thought the best way to go about it was to actually help those in need, and with what is going on now in the world with the whole COVID-19 pandemic, we decided to do a big donation,” McHugh told The Gleaner.

The houses cost US$3,500 (J$525,000) each, with Wisynco sharing the cost evenly with a donor in the United States. The homes were handed over to FFP to aid the charity’s outreach efforts.

Since its inception, the charity has built more than 35,950 houses islandwide.

Under the ‘Tan A Yuh Yard’ campaign, more than 25 houses have been donated to Jamaicans.