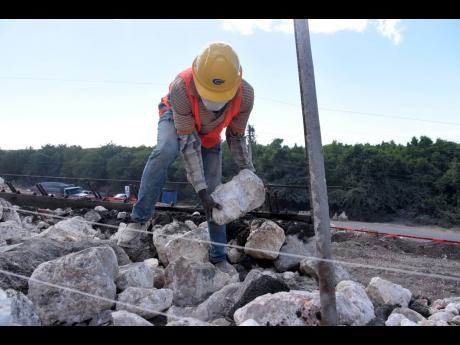 File
An employee constructs a retaining wall along the St Thomas main raod in the vicinity of Grants Pen on December 29. Work has resumed on the South Coast Highway after contractors received an extortion threat.

Work on the Southern Coastal Highway Improvement Project (SCHIP) resumed yesterday after a five-day suspension triggered by an extortion threat made last Friday.

The threat, which was made anonymously via a handwritten note, called for biweekly payments to be made if the project were to continue. It triggered a lockdown of operations even though critical wall construction and revetment protection works were in progress along sections of the badly deteriorated roadway.

Work on the project, which is being carried out by China Harbour Engineering Company, resumed yesterday following a meeting the security forces had with the National Works Agency and other stakeholders.

At least one worker on the $1.5-billion Georgia to Cedar Valley St Thomas leg of the project believes the note was the work of troublemakers.

“We feel absolutely safe. We have no problem. I don’t see it as a threat. I feel like is some loggerhead persons who just trying to create mischief and who know nothing about what they are doing ... ,” he told The Gleaner. “That’s how I looked at it. I didn’t see it as anything serious.”

Condemning the extortion attempt, St Thomas Western Member of Parliament James Robertson said: “I am very sad when the efforts have been made to make a difference in the lives of people in the area that a handful of distorted youths could do such a thing ... . For us to be going forward with great infrastructure, for people to be resorting to stupid acts like that, I hope the police identify exactly who did it and we can move on.”

During his address at the official launch of SCHIP in August 2019, Prime Minister Andrew Holness issued a stern warning against extortionists who have plagued other roadworks across the island.

Sharing that he expects that there will be a high level of accountability where the running of the project is concerned, Holness said, “Whenever we have these major infrastructure projects, people see them as opportunity ... . Not necessarily opportunity for the people, but as opportunity for themselves. Works delayed, works done, subquality, substandard, extortion, overruns ... . [It] is not going to happen here. Let me be very blunt: the Government will not stand by and allow this national project to be in any way captured by thugs, criminals, and dons.

“This project is not for fattening your pockets. This project is to help the people of St Thomas come out of a hundred years of neglect. This project will be put under the highest level of scrutiny because we know the stories and we are tired of it,” Holness said.