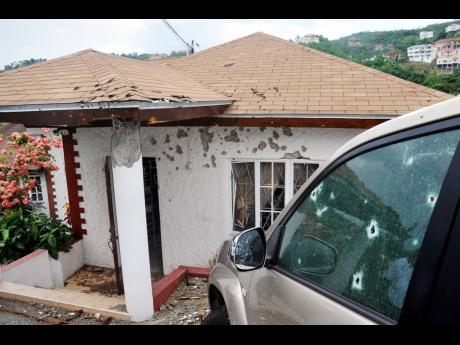 File
The bullet-riddled house and vehicle at the Kirkland Heights house where Keith Clarke was killed in 2010.

The three soldiers implicated in Keith Clarke’s murder continued their fight in the Court of Appeal on Wednesday as they seek to have the Constitutional Court ruling that the immunity certificates were null and void set aside.

Instead, the soldiers want the High Court to rule that the good-faith certificates were constitutional and valid.

Clarke was shot 21 times inside his Kirkland Close home in Red Hills, St Andrew, on May 27, 2010, during a police-military operation aimed at capturing then fugitive drug kingpin Christopher ’Dudus’ Coke.

The certificates, which were given to Corporal Odel Buckley, Lance Corporal Greg Tinglin, and Private Arnold Henry in 2016 by then National Security Minister Peter Bunting, four years after they were charged with Clarke’s murder, were expected to grant them immunity from prosecution.

But in February 2020, the Constitutional Court ruled that the immunity certificates were invalid, null, and void and that the soldiers should stand trial after Clarke’s wife, Claudette, challenged the legality of the documents.

The Supreme Court judges also ruled that the certificates were unconstitutional, manifestly unfair, and unreasonable based on the circumstances in which they were issued. The court also ruled that certificates did not prevent the director of public prosecutions from mounting a criminal case.

They are now seeking to have the High Court rule that the lower court’s decision infringed on the soldiers’ constitutional rights.

Defence attorney Michael Hylton, QC, argued that the certificates of indemnity offered a constitutional pardon of sorts, insulating them from being tried.

“There is immunity granted subject to the proof of lack of good faith, and the court is being asked to take away that immunity even if they acted in good faith,” Hylton said.

Among the grounds of appeal are that the judges erred in not giving due regard to whether the good-faith certificates infringed the principle of separation of powers and were, therefore, ultra vires, null and void.

The appeal also suggests that the judges erred in law by their failure to recognise that a delay in issuing the certificates of immunity was not a breach of any constitution provision or principle. The certificates were issued after the state of emergency expired.

The virtual hearing, which will resume on Friday, will continue with the arguments from the defence attorney, who is representing the attorney general, the second respondent in the case.

Clarke’s wife is the first respondent.