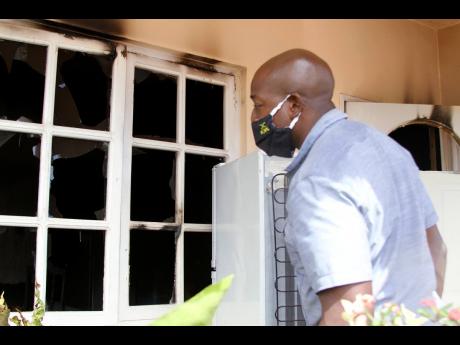 A fifth Clarendon family has now been displaced in less than two weeks as hoodlums firebombed their house on Friday night.

It is the third such incident in Lionel Town over the period, and has left the residents living in fear.

“Right now, we affi a go in as it touch the night. So we affi a put up. We nuh know wah a go happen. Di place a run a way,” one resident told The Sunday Gleaner yesterday as he called for the presence of “nuff soldiers inna di place pon di capture land” to cure the increase in violence.

Another resident, stating that the atmosphere was tense, shared that children in the community are now traumatised.

“Di kids dem traumatise, caan sleep a night time. We a call fi peace. We want dem something yah fi stop. Want everybody fi come together and live like how we used to live before,” the resident pleaded.

Clarendon South Eastern Member of Parliament Pearnel Charles Jr told The Sunday Gleaner that, although investigations were still ongoing, it can be reasonably assumed that it is connected to the reprisals and the back-and-forth violence between residents in the area.

A stern-talking Charles called on citizens to cooperate with the police and made a pledge to “put in investment – whatever it is, whether it is cameras to gather evidence, convict persons or get rid of them – but we can’t allow for criminals to feel free to operate in this space”.

He added that he was not surprised by the bombings. In fact, it was almost anticipated, based on the profile of the community.

For him, the solution now is to change that profile and not wait for such incidents to occur then react, but to address the root cause with intervention from a number of institutions.

Charles called on the Ministry of Labour and Social Security, Food For The Poor Jamaica, as well as other stakeholders, to assist the displaced families who need beds, mattresses, clothing and other supplies.