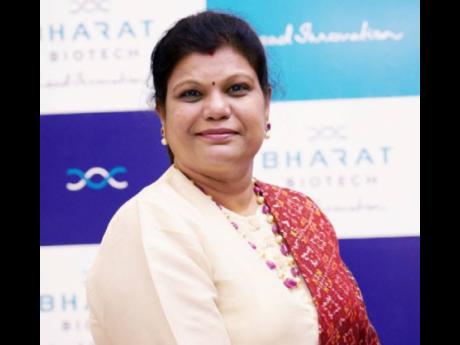 A leading Indian manufacturer of a vaccine in late-stage clinical trials has wooed the Holness administration with a pledge to inoculate Jamaica’s 2.8 million population.

Bharat Biotech, the company that produces the COVAXIN vaccine, intends to scale up production so it can supply 700 million doses annually to its target market of predominantly developing and low-income countries.

The company ramped up COVID-19 vaccine manufacturing in May 2020 and by November commenced phase-three clinical trials, involving 26,000 volunteers across 26 hospitals in India. The manufacturer last week completed the second dosage of the vaccine, which, in January, received emergency use authorisation in India and was distributed to first responders in that country. The efficacy of the vaccine is near 60 per cent based on phase one and two trials.

“We particularly want to hear about your vaccine in the areas of the timeline for the approval by the WHO (World Health Organisation) because Jamaica has established very strict standards in line ... with WHO requirements, and we are compelled to deal with vaccines which meet those standards,” said Mitchell, a former Private Sector Organisation of Jamaica president.

Ella was unable to give a timeline for approval by the WHO although she was confident that the vaccine would meet the required global standards. She said that Bharat Biotech has already produced 16 vaccines to tackle various diseases, with at least five currently pre-qualified by the WHO.

Chief executive officer of the NHF, Everton Anderson, sought clarity on the per-dose cost, but Ella said that pricing would be determined by procurement volumes.

“We will ensure that it will be very affordable, not only for our own country, because we are also a developing world economy, so we understand how important it is to make it affordable for nations at large,” she said, adding that it would be cheaper than vaccines produced in the United States.

Anxiety about Jamaica’s yet-to-start vaccination drive has been heightened amid a record surge in coronavirus infections, which cleared 20,000 on Tuesday. Almost 7,000 of those cases are active.

There have been 381 deaths.

Health Minister Dr Christopher Tufton said in a statement to Parliament on February 2 that India would be making 500,000 doses of the COVAXIN vaccine available to the 15-member CARICOM trade bloc. Tufton had said then that the Government was awaiting approval by the WHO as well as notification of the proposed allocation for Jamaica.

“We as manufacturers are not going to say no to distributing our vaccines to Jamaica. We would love to do it,” said Ella on Wednesday when asked if Jamaica was on its export agenda.

Foreign Affairs and Foreign Trade Minister Kamina Johnson Smith said that the Holness administration would update the nation in short order on further developments surrounding the importation of vaccines following the WHO’s recent approval of Oxford/AstraZeneca COVID-19 vaccines from South Korea and India.

“We are making sure that we follow all standard regulatory processes as well, which may not necessarily be followed by all other countries,” Johnson Smith said.

Tufton had emphasised that the Jamaican Government would not import vaccines that have the blessing of the WHO.

Apart from vaccines falling under the COVAX facility, specifically for emergency use, Johnson Smith said that discussions are at different stages with India, Cuba, Mexico, and Russia, following initial engagement in each jurisdiction.

Johnson Smith said the Government was also in talks to increase vaccine allocation to Jamaica through a partnership with CARICOM and the Africa Medical Supplies Platform (AMSP). A request has been made to CARICOM Secretary General Irwin LaRocque “that for all countries who don’t take up their possible allocations under the AMSP, that Jamaica be allocated further amounts so that we can, in fact, procure through that platform”.

Through the Caribbean Public Health Agency (CARPHA), Jamaica has made a formal request for 258,388 of the 1.5 million doses allocated to CARICOM by AMSP.