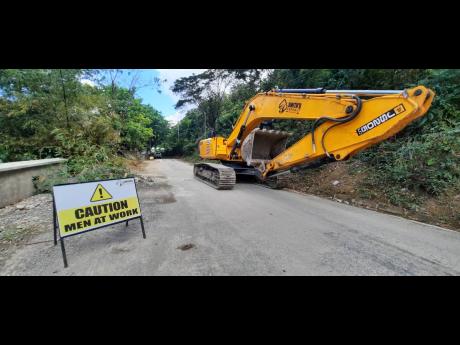 Photo by Corey Robinson
An excavator making its way along the Trinityville main road in St Thomas on Thursday. 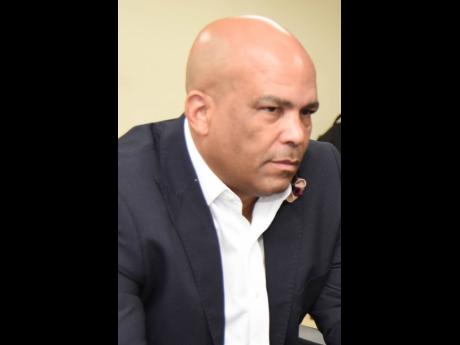 There are mixed views on an extortion letter issued at a worksite in Trinityville, St Thomas, two weeks ago that temporarily halted construction on a section of the Southern Coastal Highway Improvement Project and has left St Thomas Western Member of Parliament James Robertson peeved, if not angry.

“That [letter] is really rubbish. It’s really imbecile behaviour, and I can’t make the comment I would want to make, so I just shut my mouth,” Robertson told The Sunday Gleaner last week. “It was carried out by distorted gremlins – individuals who never got proper socialisation since birth. Young people, now adults, who are not equipped.

“We need to do some remedial work on these distorted gremlins,” Robertson stressed, amazed at the public and media attention drawn by the letter, which demanded $100,000 fortnightly from the worksite, threatening the lives of two supervisors and workmen on the site.

“Big money or big funeral for you guys,” the letter warned, listing the potential targets.

Robertson said the cowardly letter takes the focus from the developmental “wave” that awaits St Thomas, which “for more than 154 years had never had this level of investment.

“When people drive to St Thomas and they see the amount of work being done from Harbour View to Cedar Valley, people are beginning to take heart,” James pressed.

“When people see that the new [Morant Bay] town centre is still on and is part of the mix and their future, they believe that this is a place that they can retire,” he added, noting that while crime will affect St Thomas’ growth, it will not retard it.

Robertson’s dismissive approach was foreign to that of fearful workmen, at least four of whom have not returned to work since the extortion threat two weeks ago. Others who have returned say they are in constant fear for their lives even as the police carry out interrogations among them for leads to find the perpetrator(s).

“Right now, I don’t trust no man,” said one among a group of workers Thursday, ruing the level of support given to workmen, especially the traumatised operator to whom the letter was handed by armed men.

“Nobody don’t know who or what this a come from, so we can’t just take it for granted,” he continued, as others speculated whether the demand may have come from a disgruntled workman as supervisors on the site “are quick to fire di man dem”.

The workmen only worked half-day last Thursday, as police reportedly took some for interrogation.

In the interim, police sleuths say migratory criminals continue to hide out in St Thomas and they fear they could influence more novel crimes in usually low-key communities. The criminals range from escapees to wanted felons, some of whom police believe may have formed alliances with established criminal networks operating in the eastern parish.

Since last year, roughly 20 men wanted for crimes in other police divisions have either been arrested or cut down by cops. Four of the wanted men were arrested this year.

Since January, St Thomas has also recorded four murders, two incidents of shootings, and at least two cases of rape. This is a general reduction in the major crimes over the corresponding period in 2020, but cops remain alert for emerging acts of extortion and lottery scamming that may migrate with fugitives from divisions such as St Andrew Central, St Catherine South, Kingston Central and Westmoreland, their common origins.

This is one angle sleuths have been probing in relation to the delivery of the letter in Trinityville, a farming community.

“A gentleman, Kevan Lawrence, escaped from the Portmore lock-up after being charged for the murder of a policewoman in St Catherine ... . in December, police were on patrol and they came up on a group of men. A gunfight started and he was shot and killed. That man was hiding in the Trinityville space,” relayed Superintendent Allison Byfield, head of the St Thomas Police Division.

“That happened in December, but he was in the space all along and the work was ongoing all along. So we cannot say whether or not it may have been his cronies, if he had any here,” she noted. “But just as how he managed to be hiding out in the space, there just may be other criminals hiding out here.”

There have been sporadic reports of scamming, particularly in the Bath area, “but I think the criminals are more using the parish as a hideout than a place to commit crimes”, Byfield said.