Could you live off $30,000 a month? - Workers explain how they stretch budgets to survive 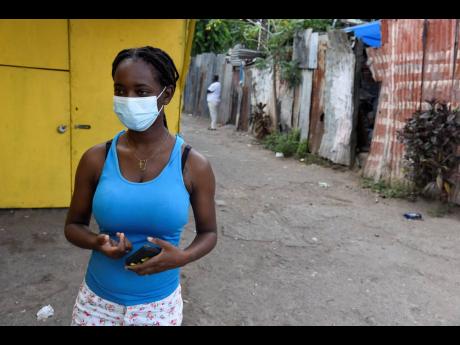 Nicholas Nunes/Photographer
Shantal McDonald, who lives in an informal community off Red Hills Road, advises persons earning the minimum wage or just above that threshold to plan their shopping routines, and to research and identify bargain retailers and wholesalers. 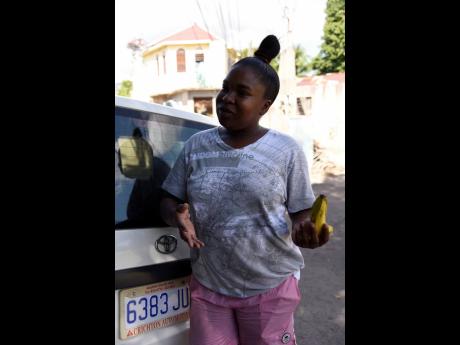 Nicholas Nunes/Photographer
Right: Indira Goodwin, a resident of Big Yard on Mannings Hill Road, said that she appreciated the $10,000 COVID welfare payout in 2020 and is urging Finance Minister Dr Nigel Clarke to offer similar help to the unemployed this year.
1
2

From the $15,000 Shantal McDonald makes every two weeks as an office attendant, she purchases grocery, pays utility bills, and finances her daily commute, but the 28-year-old certified chef said she is still happy to have a job in the midst of a pandemic.

McDonald, who works at a fairly new company in Half-Way Tree, said an additional $3,000 fortnightly would be a more liveable wage, but she has learnt to scrimp and save.

“If you don’t know what you are doing, the money done the same day,” she said.

McDonald has delayed having children and resides with her fiancé in an informal community off Red Hills Road, where she has spent all of her life. From her $15,000 fortnightly salary, she spends $4,000 for commute, buys bread and snacks in bulk, and then heads to downtown Kingston to purchase toiletries and additional groceries. She also pays her water and Internet bill, while her fiancé assists with other expenses.

Crediting her mother for teaching lessons in self-sufficiency, McDonald braids her own hair to avoid salon expenses and she tries to eat healthy. Having attained levels one , two and three HEART TRUST/NTA certification in culinary arts, she generally puts her skills to use in the kitchen to make her own lunch. Now and then, she treats herself to something nice, like ice cream.

“Sometimes I go out of the way and buy shrimp and just do something fancy, because I cannot go and spend like $8,000 for a meal,” said McDonald, who still desires to be a chef, but left that field because of punishing work conditions.

The National Minimum Wage Advisory Commission (NMWAC) concluded consultations on a new minimum wage, as well as minimum rates for private security guards in late November. The findings were to be submitted by the minister of labour, who would then submit them to the Cabinet for consideration, but there has not been much update on this matter.

However, given job losses that totalled 130,000 in the heights of the coronavirus pandemic, some employers have reduced the number of workdays for domestic helpers.

The JHWU head said her organisation has been helping to soften the financial blow by providing helpers with baskets of groceries regularly. They have distributed 2,500 care packages contributed by private-sector groups and have sourced additional groceries from charities like Food For The Poor.

CHILDREN AT A LOSS

There are currently 6,900 domestic workers registered with the union, but there are an estimated 58,000 locally.

“We know that it is hard, especially with the online schooling that is happening. We believe that children of domestic workers are being left behind, because they don’t have the money to buy the equipment for them to do the online classes,” said Pryce, outlining how Wi-Fi access and inadequate electronic devices added new hurdles to education.

Pryce believes that some employers have been going above the call of duty for their employees, but she feels the Government could do more by providing a stimulus package for low-paid employees like domestic workers.

A similar sentiment has been echoed by president of the lobby, Consumers Intervention of Jamaica, Michael Diamond.

“The Government can, and should, do more of that CARE Programme,” said Diamond, referencing the Government’s coronavirus welfare.

Under the state-funded COVID Allocation of Resources for Employees (CARE) Programme, 375,000 Jamaicans were deemed eligible for compassionate grants. Thirty thousand persons qualified for the Supporting Employees with Transfer of Cash (SET Cash), which was for employees who had either been laid off or had their jobs terminated as at March 10 last year because of the economic fallout from COVID-19.

Diamond doesn’t believe a minimum wage increase should be considered at this time, since some employers are also feeling the financial crunch.

“There is always an argument that minimum wage may be too low, but then there is always the numbers and the mathematics that say, in most cases where minimum wage has increased, unemployment grew. So striking a balance is very difficult,” said the consumer rights advocate.

He believes the Government’s failure to assist those who are earning a minimum wage may lead to other crises, such as an increase in non-communicable diseases. He suggests that the Government also consider issuing vouchers geared towards nutritious purchases.

However, labour expert Danny Roberts has dismissed Diamond’s claim that there was a correlation between minimum wage increases as a trigger to greater unemployment.

“There is no truth to that,” said Roberts, head of the Hugh Lawson Shearer Trade Union Education Institute.

“... The increase in the minium rate would have to be quite signifcant for that to happen.”

Minimum wage increases are usually in line with the rise in inflation.

Indira Goodwin, who was laid off last November from her job, was a beneficiary of the $10,000 grant offered by the Government.

“I wouldn’t mind if that could run again, because it help out,” she said.

The former restaurant worker lives in an informal community called ‘Big Yard’ off Mannings Hill Road, St Andrew, with her five-year-old daughter, her child’s father, an auto body work technician, and three of her boyfriend’s relatives.

Her salary often went towards purchasing groceries and financing bus fare to get to work.

Goodwin’s boyfriend foots the bill for her daughter’s schooling, and everyone in the household pools resources to pay for water, Internet, groceries, and other necessities.

Their property is leased. They generally purchase ‘handcut’ (similar to chicken back) at the rear of a nearby supermarket and occasionally buy small snappers at discounted prices. Fruits are purchased daily from a vendor who provides the community with an assortment for $100. They also gamble to help supplement the family’s income.

The mother of one said that $10,500 weekly would be a liveable wage.

“We have to be grateful. Who is going to look at you now and give you $10,000?” she said, when asked if the money allotted to CARE Programme beneficiaries was sufficient.