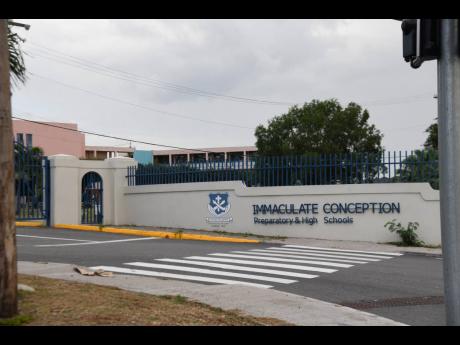 A very slim department of internal auditors in the Ministry of Education has been pinpointed as one of the major weaknesses in holding schools financially accountable as a probe deepens into suspected irregularities at Immaculate Conception High, where the National Education Inspectorate (NEI) said it uncovered no red flags during its last inspection two years ago.

Over the years, the traditional operations of many public schools have rapidly transformed into multimillion-dollar enterprises, outpacing oversight mechanisms.

Sherene Carter Moore, president of the Bursars Association of Jamaica, told The Gleaner that the ministry auditors visit schools once every five years, except when they have been called in.

That is not the best arrangement to have to uncover irregularities in a timely manner, suggests Linvern Wright, president of the Association of Principals and Vice Principals.

“If it is that you are doing a year-over-year audit of the schools, then I think you would have a better basis to discover anything that’s going wrong. Obviously, a five-year lapse would be an issue if it is that what you really want to do is to maintain that integrity and oversight of the system,” Wright told The Gleaner yesterday.

Although upwards of $30 million has reportedly disappeared down the rabbit hole at Immaculate Conception High, Maureen Dwyer, chief inspector of the NEI, told The Gleaner that the last time the management practices at the St Andrew-based institution were looked into, no irregularities were found, although there was no in-depth examination of its financial affairs.

“When the NEI goes out, what we try to do is to establish if there are strong mechanisms for accountability. We probed a little bit to see if they have a current audit report, and when we last visited them in 2019, everything was in place, including the financial audit report. We didn’t have any adverse reading at that time,” Dwyer said yesterday.

Dyer said that the operations of the school boards are also examined by the NEI, pointing out that it is these boards – specifically the finance committee – which have ultimate responsibility for the financial affairs of schools.

Wright contended that some school boards do not have the capacity to conduct diligent oversight of the institutions’ affairs.

“There are many things that would be beyond many of these people. What really hinders [accountability] is the fact you don’t have the persons who you recruit to give the oversight as a board of management giving the kind of oversight [needed], more because of incompetence than anything else because I think many of them really try hard … ,” he said.

The principal suggested that schools be managed in clusters, rather than having an individual board for each institution, to pool talent and provide better oversight.

Education Minister Fayval Williams is pushing for a national accounting management system to enable her ministry to monitor the financial affairs of schools.

However, Carter Moore pointed out that some schools are still doing manual accounting, although the Bursars Association has been pressing the Government to upgrade them.

There are roughly 350 bursars in the public education system and a number of them have one or two assistants, depending on the school population.