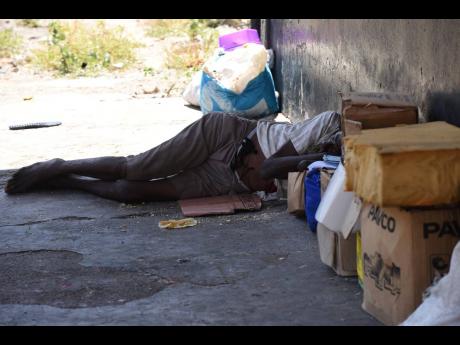 A second person has been detained in relation to the deadly overnight attacks on homeless people in the Corporate Area last month.

Three homeless men were chopped to death in downtown Kingston and a fourth killed in southern St Andrew. Two other injured homeless men were found at a Constant Spring Road plaza and on Derrymore Road in the St Andrew Central Police Division.

A few days later, one of the wounded men succumbed to his injuries.

“One person was detained in the case of the three (Kingston Central). I know a number of youngsters were detained, in which one was charged in relation to the other incidents,” Minister of National Security Dr Horace Chang said at a Gleaner Editors’ Forum on Tuesday.

The minister said those cases remain in the courts.

Chang added that the case in the Central Kingston area was caught on camera and the individual was detained “pretty quickly”.

A security guard at the Kingston and St Andrew Municipal Corporation temporary night shelter on Church Street told The Gleaner on Tuesday that since the January 25 incident, an influx of people have been seeking refuge there.

“Whole heap more people a come in. Dem a come in ‘cause man deh a road and fraid,” said the guard, who asked not to be named.

There are approximately 2,000 homeless people in Jamaica, around a quarter of them, or 500, in downtown Kingston alone.

Sudan Shurland has been homeless for the past six months, as her dilapidated home was no longer habitable.

She has been fortunate to secure a bed at the shelter every night and has never had to sleep on the streets.

“I’m used to those type of things. Where I was living, you hear gunshots like nothing,” Shurland said, when asked about January’s shock murders.

A young homeless man who was seated outside the shelter said it has become his new daytime sanctuary.

The area is manned by a security guard and he believes it is much safer.

“For the time being, we jus haffi keep wi self safe. I try to stay by myself and I go inside in the nights,” he said.

An 80-year-old woman disclosed that she had no fears in the aftermath of the bloody incident.

“Jesus takes care of me. I am a Maroon and a Roman Catholic. Dem cyah do me nothing, in Jesus’ name!” she exclaimed.