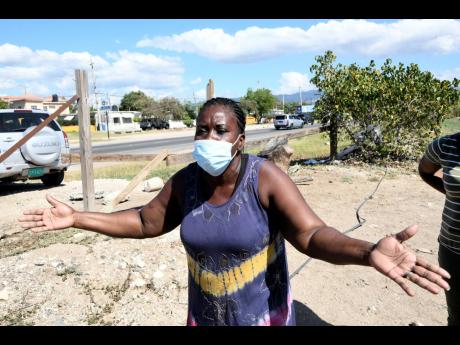 Rudolph Brown/Photographer
Passagefort resident Claudette Sinclair-Mullings describes the rising dust as like a whirlwind as it rides in the wind and engulfs their homes. 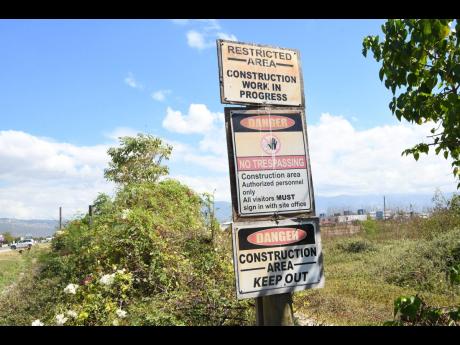 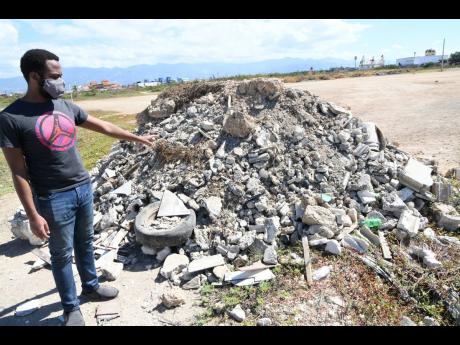 Rudolph Brown/Photographer
Matthew Williams points to a mound of rubble which contributes to the dust nuisance in the Passagefort area. 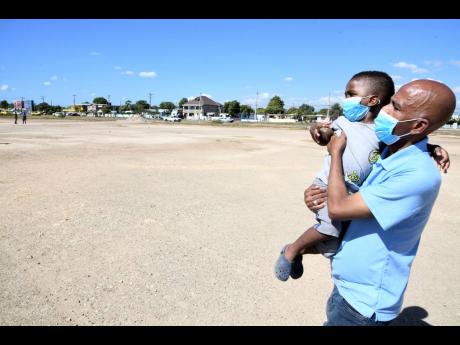 Rudolph Brown/Photographer
With son Cai-August Williams in hand, Richard Williams, a resident of Passagefort in Portmore, complains about the dust nuisance being caused by a 15-acre piece of land designated to be a climate change park in the municipality.
1
2
3
4

Residents of Passagefort in Portmore, St Catherine, have been wearing masks long before COVID-19 hit Jamaica as the proposed location for a climate-change park across from their community has been a dust nuisance for the last 40 years.

The 15-acre lot, which is situated across from the Portmore Mall and several other commercial entities, has been blamed for the health woes of residents, who say they have been experiencing asthma attacks and other ailments as a result of the dust.

It appears that there is a dispute as to who owns the lot, and is, therefore, responsible for its maintenance.

“I wrote to UDC (Urban Development Corporation) about it, [and] to this point, UDC can neither confirm nor deny that they own the property,” said Matthew Williams, a third-year law student who lives across from the space.

WATCH: Condemned to a dust bowl

Several years of making contact with the UDC and the Portmore Municipal Corporation to ascertain the true ownership of the property has not provided any clarity, supporting the residents’ fears that they are doomed to living in a dust bowl.

“The area is just an eyesore, and then you think about the inherent property value. Nobody would want to live in front of this or behind this, and this is a major thoroughfare,” said Williams, who pointed to the fact that the dust from the property affects visibility and could be problematic for motorists travelling along the usually busy stretch.

Williams said that despite the fact that residents have been very compliant with paying property taxes, they feel that they are being punished, rather than rewarded.

The problematic 15-acre property was set to serve dual purposes as a climate-change park and a transportation hub, but there has been no progress on these developments despite several groundbreaking ceremonies.

The proposed climate-change park, which was scheduled to be completed in 2017, was to be created by the Portmore Municipal Corporation in partnership with the German city of Hagen under a Municipal Climate Partnership Programme.

Germany had promised to allocate €250,000 (approximately J$46 million at today’s exchange rate) to the project, which was expected to feature solar and wind energy systems, rainwater harvesting, a jogging trail, a water fountain, park benches and a waste-water treatment plant, among other things.

Although the two cities were linked in 2012 under former Portmore Mayor George Lee, who died while in office in 2013, details about the development only came to national prominence in May 2014, when the climate change park was designated the national Labour Day project for that year.

Though faded, a huge sign remains on the property with the names of ministers of government, then German Ambassador to Jamaica Josef Beck, and Thomas – who was acting mayor at the time – highlighting the partnership.

More than 100 blue mahoe, lignum vitae, mahogany, and poui trees were planted along the area’s periphery as part of the Labour Day project, but several have died for lack of maintenance, including watering.

Motorists have also been using the huge property as a shortcut to get to the nearby toll road and the commercial district, thereby contributing to further dust nuisance.

When The Gleaner made contact with Thomas in March 2016 to discuss the impact the area was having on residents, the mayor said that apart from the proposed plans for a climate-change park and a transportation hub, the Portmore Municipal Corporation also intended to build a monument dedicated to the Spaniards.

NOTHING TO BE DONE

The mayor noted that there were other open lots in Portmore causing a dust nuisance because the time is dry and that there was nothing that the municipal corporation could do.

“We are hoping to get funding to do what we want to do. There is nothing that we can do to stop the dust from blowing over there because they live there years now and the dust usually blow across there. It’s nothing new,” he said.

The residents claim that they have been snubbed by officials at the municipal corporation. However, Claudette Sinclair-Mullings said that Thomas did send someone to deliver a truckload of rubble to block one of the entry points to the park to prevent motorists from gaining access.

After tweeting a video highlighting the dust nuisance this week, Williams said that officials at the UDC reached out to him to arrange a meeting. That meeting took place a few hours after The Gleaner team visited the area to speak to residents on Tuesday. The law student said that St Catherine South Eastern Member of Parliament Robert Miller also reached out to him on Tuesday to explain that initiatives were being planned for the space.

The Holness administration had campaigned on a pledge to make Portmore Jamaica’s 15th parish if re-elected, and a joint select committee met yesterday to discuss paving the way for this to become a reality.

Miller, a first-term MP, said during the committee meeting that he is in discussions with the UDC to develop the property into a recreational space similar to Emancipation Park in New Kingston.

“I know the previous member of parliament had planned to put a bus park there,” he said.

Miller sought the National Environment and Planning Agency’s input on the proposal, to which CEO Peter Knight said that there was scope for more debate on the issue.

But the residents are tired of promises.

Sinclair-Mullings, who has been living in the community for 45 years, said that the area was a “crab bush” before it was dumped by the authorities.

She added that she was admitted to hospital in 2014 because doctors found that her lungs were infected.

“It come in like is a whirlwind, a smoke when it erupts,” Sinclair-Mullings said of the dust, which has become a feature of their daily lives.

“We had dusts on our plates, dusts in our beds, dust everywhere,” Williams also said, describing a recent encounter when heavy winds dumped mounds of dust inside their living space.

He believes that the prime location could be outsourced and developed as a hub with workplaces or used for the development of houses.

“It’s a massive piece of property and ripe for development,” he said.