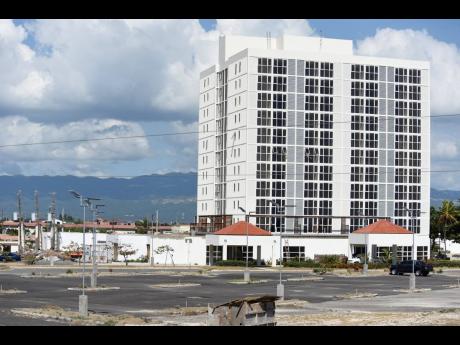 Nicholas Nunes/Photographer
The old Forum Hotel in Portmore. A proposal has been made for more multi-storey residential and commercial buildings to be constructed in the St Catherine region.

The densely populated municipality of Portmore should transition to high-rise living as one of the fastest-growing regions in Jamaica.

That is one of the proposals that is being mulled by a joint select committee examining the prospects of Portmore being designated the island’s 15th parish.

Peter Knight, chief executive officer of the National Environment and Planning Agency (NEPA), said during his presentation on Wednesday that two- and three-storey buildings may have to become a standard model.

“To accommodate this rate of growth, given the limited land that is available, there will be need for development to be more intensive and smart, so we can’t just build a one house on the flat,” said Knight.

Frances Blair, senior manager in NEPA’s Planning Subdivision, said that it was proposed that existing unplanned settlements in areas such as Gregory Park, Newlands, Naggo Head, and Old Braeton be redeveloped at higher densities for housing and commerce.

Similar recommendations were made in a provisional development order for the municipality, which was produced in 2018. It was produced after consultations with several government regulatory agencies and residents.

The order has not yet been confirmed by Prime Minister Andrew Holness.

“The Portmore Provisional Order recommends that residential density and height be increased to between 125 and 250 habitable rooms per hectare and height of between four and six floors,” said Blair.

Portmore has only 17,866 hectares of land, with more than 76 per cent government owned while approximately 23 per cent is private property. The Urban Development Corporation is the largest landowner overall.

Portmore is situated within a flight path, which means that the Jamaica Civil Aviation Authority will need to be consulted to determine just how high buildings can go.

Recommendations were also made for an additional 12 primary schools, eight secondary schools, and a tertiary institution to be built. There was also a proposal for the establishment of a Type A hospital, an additional seven Type Three health facilities, one more fire station, an infirmary, and a courthouse, among other social services.

Knight said Portmore provides several opportunities, but there are also several weaknesses, including the failure to execute plans. The parish is also vulnerable to natural disaster, has very little farmland, and has inadequate physical and social infrastructure.

An estimated 70 per cent of the total land area is environmentally sensitive, comprising protected, conservation, wetlands, woodland, and forested areas.