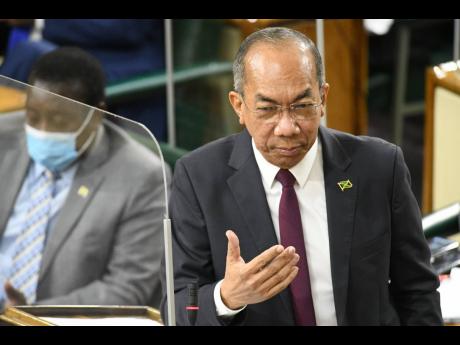 A member of the panel that drafted Jamaica’s Charter of Fundamental Rights and Freedom has cautioned that the constitutional arrangement governing the use of states of emergency (SOE) was deliberately made difficult.

Dr Lloyd Barnett, who chaired the Constitutional Commission that drafted the charter, was responding to National Security Minister Dr Horace Chang, who described parts of the arrangement as “inappropriate”.

“A democratically elected government cannot be vetoed in carrying out executive action in the face of a crisis and should not be in a democratic society,” Chang argued during a recent address to Parliament.

“It is inappropriate to block executive attempt in the interest of the people,” he continued.

Under the existing constitutional arrangement, an SOE can be imposed for an initial 14-day period by the governor general on the advice of the prime minister following a recommendation by the heads of the security forces.

However, the Constitution requires a two-thirds majority vote in both legislative bodies, the House of Representatives and the Senate, for it to be extended.

The Lower House comprises 63 elected members of parliament while the Upper House has 21 appointed senators, 13 on the government side and eight for the Opposition.

Where an administration controls a majority of the seats in the Lower House – as is the case with the Holness administration – extension of an SOE would still require the support of at least one opposition member.

This arrangement was introduced by a previous Jamaica Labour Party (JLP) government under the leadership of then Prime Minister Edward Seaga.

It followed the tumultuous 1970s when several senior JLP figures, including Chang’s Cabinet colleague, Olivia ‘Babsy’ Grange, and former House Speaker Pearnel Charles Sr, were rounded up and jailed under an SOE imposed by the then Michael Manley-led People’s National Party (PNP) administration.

Chang doubled down on his personal view during a virtual Gleaner Editors’ Forum on Tuesday, insisting that “once you have a democratic society, you will be subjected to accountability in an election”.

“And if you fail dramatically, you will, of course, fail in an election system. We have lots of confidence in our electoral process and where an elected government sees the need for that kind of activity they should be allowed to proceed,” he added.

But Barnett strongly disagreed, countering, ironically, that the SOE arrangement was deliberately made difficult because of the abuses the JLP complained of that were committed by the Manley government.

According to Barnett, there was a strong view among parliamentarians, including Seaga, at the time of the proposed changes, that the imposition of an SOE should be a “very strictly controlled parliamentary system”.

“The fear is that it will be abused. Even now it is abused,” he charged.

“Because you can have a democratic form of government where people are elected and you abuse your majority power and then you have to wait for five years before you can correct it ... ,” he said, referring to the time between parliamentary elections in Jamaica.

“That was a very strong signal to politicians that the exercise of such extraordinary powers should not be easily gifted. The strictness of the provision was designed to protect the human rights of Jamaicans,” he insisted.

However, Chang’s view found favour with Grange, now the minister of culture, gender affairs, entertainment, and sport, who was jailed for nine months under the SOE imposed in 1976 by the then PNP administration.

Grange recalled how she was exiled from her own country immediately upon her release from jail.

“I was only released on the fact that I agreed to go to Canada to my family and I was escorted on a plane by a female police constable and an army officer,” she told The Gleaner on Thursday.

“It was an awful period, a frightening period.”

Still, Grange believes the government of the day should not have to rely on the backing of parliamentary rivals for SOEs, though she said “it is always good to seek the cooperation and support of the Opposition”.

“Even if the Opposition objects to it, the government, who is responsible to seeing that the country is governed properly, should not have to rely on the Opposition’s support,” Grange reasoned.

Grange raised the caveat, however, of public trust that the government would not abuse its power.

The Opposition has criticised the SOE strategy, but given support to extensions, with the exception of persistent objector Peter Bunting.

Since 2018, the Holness administration has imposed SOEs across 10 of 19 police divisions in its bid to stem murders. But while killings fell in the majority of those divisions, the cumulative impact islandwide was not as effective. Jamaica recorded a dip of less than two per cent in murders in 2020.

SOEs discontinued ahead of last September’s general election. No SOE has been imposed since a High Court judge ruled, months after the poll, that the continued detention of five men under the SOE was unconstitutional.

The Government has appealed the ruling handed down by Justice Bertram Morrison.