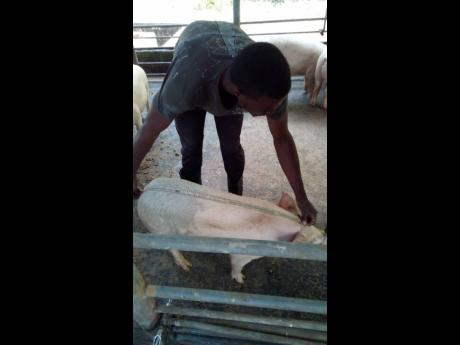 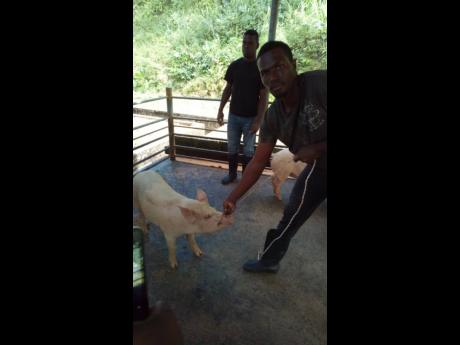 Photo by Gareth Davis Sr
Rayon Gayle, a student of the College of Agriculture, Science and Education, securing a pig for treatment.
1
2

Ryan Gayle, a student of the College of Agriculture, Science and Education (CASE) at Passley Gardens in Portland, is seeking to make his mark in creating a better future for livestock breeding as climate change takes its toll on animals.

Hailing from the parish of St Catherine, the fourth-year student told The Gleaner that pursuing a career in animal science was only natural as his family was deeply rooted in agriculture.

Gayle spent his boyhood years with his grandparents and other family members on a farm, witnessing and engaging in the planting and selling of a variety of crops, including yam, cocoa, banana, peppers, and pak choi, along with the rearing of animals.

“Farming has been a part of me for many years. I grew up on a farm with my grandparents in St Catherine, which could have influenced my decision to pursue a career in agriculture,” said Gayle, a recipient of a 2020 Seprod Foundation scholarship.

“I remember how excited I was during the planting season, and during the time of reaping, it was pure excitement. Going to the market was a special period for me as most of the produce was sold by my grandfather and grandmother at the market. Going out with them to the farm early in the morning really sparked my interest,” added Gayle, sharing his joy in every aspect of the process.

“My decision to pursue a career in animal science is simply to help and assist with formulating new ideas to combat climate change, which is having an adverse effect on the breeding of our livestock. Climate change is affecting our animals and, therefore, there is a need to come up with some creative ideas as to how we can create additional breeds of animals that can withstand the climatic conditions that we are now facing,” he added.

The 28-year-old animal science student said that climate change has seriously reduced breeding among livestock, for example. Goats, pigs, chicken, and cattle are among those threatened, he told The Gleaner.

“The Jamaica Hope cattle, which were developed by Thomas Lecky, was the top producer for many years. But over the years, we have seen a decline in the animal’s performance and we can see now that there is a need for an additional breed that can put our dairy sector where it is supposed to be. In countries like Holland and so forth, they are producing far more than what we are doing,” said Gayle.

“I am hoping that in pursing such a career, I can make a difference in improving on our breeding capabilities, as it relates to our livestock. I love genetics, and therefore I am willing to make my contribution to this society and to secure a better future for livestock breeding,” Gayle concluded.

Editor's Note: The Jamaica Hope breed was developed by Thomas Lecky, not Keith Thomas. We apologise for the error.