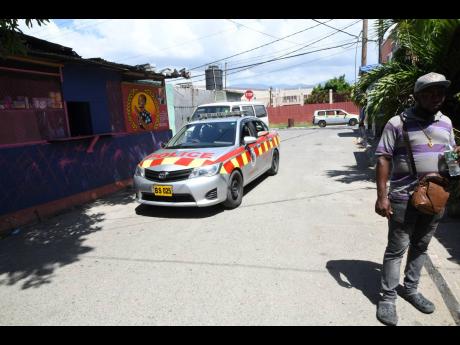 Rudolph Brown/Photographer
Police maintaining a presence in Mongoose Town yesterday after a triple murder in the Corporate Area community on Sunday night. 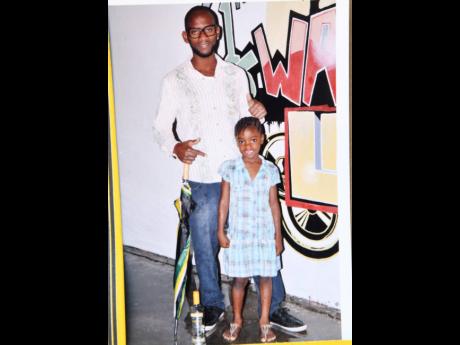 Contributed
Navay Samuel poses with his daughter in this undated photo provided by his family. Samuel was among three people killed in Mongoose Town on Sunday.
1
2

Sundays – the days usually reserved for worship, rest, reflection and recreation – have been transformed into a time of chilly uneasiness for residents of Howard Avenue off Waltham Park Road in the Corporate Area, as they are almost certain to be...

Sundays – the days usually reserved for worship, rest, reflection and recreation – have been transformed into a time of chilly uneasiness for residents of Howard Avenue off Waltham Park Road in the Corporate Area, as they are almost certain to be visited by deadly violence.

A drive-by triple killing on the weekend was a hellish reminder of how things have changed in the area commonly known as Mongoose Town.

Residents say that despite no feuds being in the community for years, they cannot seem to escape violent deaths, especially on Sundays.

“Same drive-by kill me nephew. See him picture deh pon di shop, It was a Sunday. Each time dem come to do drive-by is on a Sunday. We a feel it, me a tell you,” one female resident told The Gleaner yesterday, adding that many residents do not venture far beyond their gates in the event that they need to run to safety in a flash.

The increasing death toll is frustrating the community.

“Dem kill one, then two and now three. The next time a how much?” another resident lamented.

Samuel’s mother, Leonie Campbell, told The Gleaner that she has now lost two children to gun violence– both on Sundays.

“He is a very good child, a jovial person and he likes to work,” she said of her son, who, although he worked with a customs broker had been out of a job since the start of the year as “the COVID kinda slow things down”.

Up to the time of his death, Samuel had been busy applying the finally touches to his shop and had plans to construct his house.

“He had a 15-year-old daughter and he wanted to go upstairs and build something for himself,” his mother said. “About 4 p.m., he came for his dinner, and I left for work.”

Based on reports she had gathered, Campbell said that a group of people were hanging out when a vehicle drove up and the occupants opened fire.

She was at work when she received the dreadful call.

“He was a very good one. He is the last of five,” she said as relatives and friends consoled her. “We are taking it hard. Is not like he was in a fight and he died. He was sitting down and the car speed down and start spraying shot all over the place.”

Morgan, who was reportedly the first to be shot, died on the spot.

His friends told The Gleaner that he was a hard-working man.

“A cool youth, hard-working, and deh ya amongst we a live good”, a male resident said.

One of the men who died in the incident, Wright, is said to be mentally challenged and was killed in front of his mother.

Police report that about 7 p.m., the men sitting along Howard Avenue were approached by men travelling in a Nissan AD motor car who opened fire hitting five, three fatally.

The entire 57 Waltham Park Road community is torn and cowering in fear.

“The mother deh right deh so and her son a get shot and she can’t do nothing. Down to the dog ‘fraid. Dem lef the road in a darkness,” said resident Marsha Finn. “Me feel it. Mi lose my son 2017 … . Only thing mi a tell these gunmen, ‘Serve God and repent’.”

Her cousin, the brother of Navay Samuel, was also killed in that double murder.

The murder of Andre Shaw, who was was shot on Sunday, February 23, 2020 and whose mural is on display in the community, is another reminder to the residents that Sunday is not just another day for the residents.

Investigations into the triple killing are ongoing.