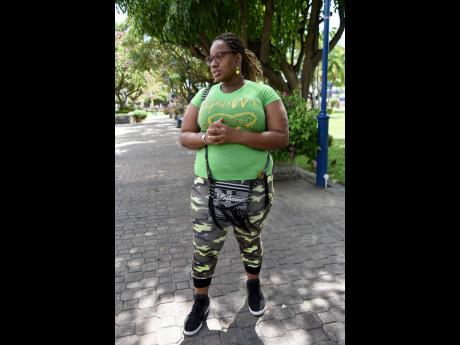 Ian Allen/Photographer
Kresten Stewart has wanted to become a policewoman since childhood. That dream was shattered when she was turned back at a recruitment centre, allegedly because she has epilepsy. 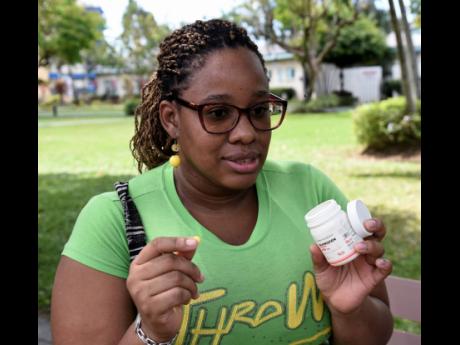 Ian Allen/Photographer
Kresten Stewart, who was allegedly rejected as a recruit by the Jamaica Constabulary Force because she has epilepsy, shows medication she takes for her condition.
1
2

From around 6, Kresten Stewart nurtured dreams of one day serving her country as a policewoman.

Having applied to the Jamaica Constabulary Force (JCF) and gone through an interview, she was closer to fulfilment.

The 27-year-old woman, who is on medication daily for epilepsy, although initially worried that her disorder would have been an issue, was optimistic after she was invited to do a physical examination.

Stewart, having been diagnosed with epilepsy from age two, had declared her medical condition on the application form and was assured during her follow-up interview that it would not have been a problem, after divulging that she has one or two episodes monthly.

But the young entrepreneur was left in tears when she turned up at the Twickenham Park Police Academy in Spanish Town, St Catherine, on February 27, to undergo a physical examination and was told that she did not meet the “standard” because epilepsy presented safety risks.

The Franklyn Town, Kingston, resident, who had been super excited and had even started working out to loosen up her muscles in preparation for the physical was devastated.

Stewart is one of several would-be recruits who are concerned that the JCF’s enlistment criteria are discriminatory to persons with certain disorders.

She was especially distraught that the recruiters had waited until she had changed into her workout gear, after waiting for hours in the sun, to share the disappointing news with her.

When she got home, she cried her eyes out and had to be consoled by her family.

“They have no idea how much I really wanted this and how much they just shattered my dreams,” she told The Gleaner on Sunday with tears running down her face.

“I believe that if maybe they had just told me on the phone that we saw on your application that you’re epileptic and because of this we’ll not be able to have you come and do the physic exam, I would’ve felt a little better, maybe knowing that they didn’t let me go up there, go through all of that just to be sent home,” Stewart said.

Stewart, who was among a small group of women with asthma, sickle-cell trait, and sickle-cell disease who were turned down, feels the JCF should publicise on its website or in the recruitment advertisement all factors that would render candidates ineligible.

“I do believe they owe all of us an apology,” she said.

Another police hopeful who has sickle-cell trait and was rejected agrees with Stewart that the police could have been more forthcoming.

The 21-year-old woman, who opted to remain anonymous, like Stewart had not only dreamt since childhood of serving her country as a cop but was also looking forward to tapping educational opportunities in the force.

“I was always hoping that this would have been my breakthrough from poverty,” said the woman who had applied to the force in 2019 fresh out of six form.

Like Stewart, she, too, had declared on the application form that she had sickle cell-trait.

Further, she said the issue was not raised as a stumbling block during the two interviews that she had done at the station and at a police recruitment centre.

The young woman, whose mother is a sickler, said she discovered that she had the trait while in sixth form after a minor accident, but has never had any related illnesses or medical complications. She was devastated at being barred from the force.

The rejected police recruit questions why eligibility barriers were not declared to them at the offing.

In the meantime, both women are of the view that the JCF should not disregard people with their conditions, as there are various duties, including administrative ones, that cops can perform outside of chasing and arresting criminals or engaging in high-adrenaline combat operations.

Camillle Daley, founder and president of the Sickle Cell Support Foundation of Jamaica, said that while she understands the JCF’s caution about hiring persons with sickle-cell trait, some who have the blood disorder live near-to-normal lives with few or no complications.

However, she said, there are cases where persons will indicate that they have the trait but in reality have a mild case of sickle cell.

“There is also a myth that persons with the trait can have pain and other problems, but that is not so,” Daley noted.

However, she urged the JCF to conduct an electrophoresis examination on persons who declared having the trait. Those who record a normality assessment of 90 per cent should be allowed to enlist.

Head of the police information arm, Senior Superintendent Stephanie Lindsay, said it was the force’s policy not to accept candidates with certain medical conditions, including sickle-cell and epilepsy, for safety and security reasons.

“A lot of things have to be taken into consideration, but we don’t discriminate against persons because they have a particular ailment, but there are some ailments, given the nature of the job, some persons are not an ideal candidate,” she told The Gleaner.

Lindsay also noted that she was not entirely clear about the distinction between full-blown sicklers and persons with sickle-cell trait.

“I trust the recruiters and they know what they are looking for and they would never discriminate against anybody,” said the senior superintendent. “They are trying to recruit fit and able-bodied persons who can withstand the rigours and stress of the organisation.”