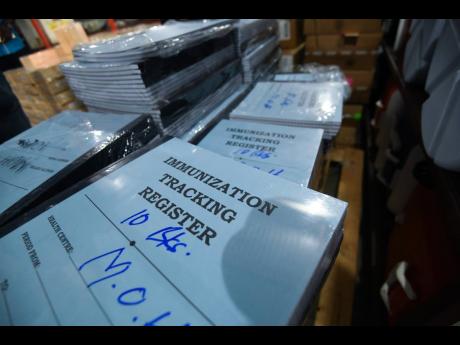 Ricardo Makyn/Chief Photo Editor
Immunisation registers are seen at the warehouse in Vineyard Town, St Andrew, where syringes and other vaccination equipment are being stored.

Approximately 65 per cent of Jamaicans are being targeted for vaccination by March 2022.

However, health officials are wary that vaccine hesitancy might affect that ambitious goal.

The country is expected to receive its first batch of 50,000 vaccines from India by Thursday, which will form part of a total of 974,800 doses to be dispensed over the next three months.

“One of the big reasons why we can’t do more than those targets that have been set is because, as of now, based on these plan, the bottleneck is the people to implement, the technical people to implement,” said Health Minister Dr Christopher Tufton during the unveiling of an interim vaccination plan on Tuesday.

“We have to use people who are qualified, [and] the truth is we are limited.”

Permanent Secretary Dunstan Bryan said that 893 health professionals are to be contracted across the island to assist with conducting vaccinations at blitz sites that will be established at major locations in each parish.

The aim will be to vaccinate at least 1,000 persons at these sites on Fridays, Saturday, and Sundays.

“These are going to be operations that are in addition to the operations at health centres and hospitals, and therefore, these are persons who will be compensated outside of their ordinary contractual arrangements to operate the site,” Bryan said.

But given a shortage of health workers in the island, the health officials are already advising Jamaicans to exercise patience during the vaccination process.

“We still have to treat the hypertensive 65-year-old lady who needs to go to the clinic, the unfortunate victim of cardiac arrest or motor vehicle accidents,” he said.

President of the Medical Association of Jamaica (MAJ), Dr Andrew Manning, said that his organisation will be assisting with the mobilisation of private doctors to assist in giving the jab.

“We have to really get this vaccine roll-out done soon and in as quick a fashion as possible, because a lot depends on it in terms of protecting the persons at high risk, including the healthcare workers, and elderly people and so on,” he said.

More than 5,000 government officials, including the governor general; nearly 16,000 healthcare workers; and 174,987 elderly Jamaicans are among those who will be targeted in the first phase for inoculation.

It will take anywhere between 35 to 52 minutes to get each vaccination done, as time has been allotted for registration, counselling, administration, observation, and documentation.

Given the demand for medical personnel, president of the Jamaica Medical Doctors Association (JMDA), Dr Mindi Fitz-Henley, said the organisation has been trying to ascertain the number of unemployed doctors in the island.

They are already aware of 13 in western Jamaica, including a medical microbiologist.

“All of these doctors have been begging and pleading to be employed in the public sector; they have just been almost monthly resending their résumés and are still awaiting a response,” she said.

A public call will be made for persons to make an appointment to get vaccinated based on priority groups.

Persons will need to apply for an appointment five days before their desired date.

Appointments will need to be made through the health ministry’s website or via the call centre (1-888- 663-5683), at a health department, or a regional health authority.