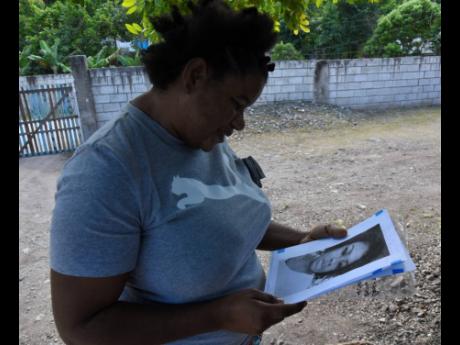 Ian Allen/Photographer
Narda McKoy looks at a photo of her daughter, Jalisa McGowan, who died from asthma-related complications on Friday, February 26.

Narda McKoy covered her face with a picture of Jalisa McGowan to hide the tears streaming down after reading a note scribbled by Jalisa’s little sister, Karlisa McKoy, following her passing last Friday. Karlisa, a seven-year-old, wrote: “I love you...

Narda McKoy covered her face with a picture of Jalisa McGowan to hide the tears streaming down after reading a note scribbled by Jalisa’s little sister, Karlisa McKoy, following her passing last Friday.

Karlisa, a seven-year-old, wrote: “I love you, my sister, and you’re sweet.”

Though she constantly refers to Jalisa as being in Heaven and whispers of her love, Karlisa has since suffered sporadic anger spells, which her mother believes stem from her struggle to cope with her sister’s shock death.

Mrs McKoy alleges that 17-year-old Jalisa died after medical personnel at the University Hospital of the West Indies (UHWI) offered no assistance when she was rushed to the emergency room in the midst of an asthma attack.

After gasping for air for more than an hour, Jalisa was pronounced dead at Andrews Memorial Hospital, where she was taken for treatment afterwards.

While admitting that she, too, needed counselling, Mrs McKoy was worried on Wednesday about Karlisa’s emotional turmoil.

McKoy’s concerns have heightened while watching her daughter dance all day Tuesday, refusing to do her routines.

But despite the pirouettes and the pliés, Karlisa’s parents say the vivacious glint has disappeared from her eyes, as she continues to inquire what will happen to Jalisa’s bed and other belongings.

“The guidance counsellor at Stella Maris, I spoke with her, so she is going to set up a time for her to work with her because myself deh ya need answers,” the mother said.

McKoy, an assistant special-education teacher for 20 years who is pursuing further studies at Shortwood Teachers’ College, said she does not see herself going back online anytime soon.

As Friday night’s trauma is replayed in her mind, Mrs McKoy has had to miss out on exam preparations.

Husband Karl McKoy said he has been trying to be supportive of his wife, who has not stopped crying. Mr McKoy said his wife had another bout of bawling Wednesday morning after respreading Jalisa’s bed and washing her clothes.

“A di last wash me a wash fi her,” she told The Gleaner, while gazing at the clothes on the line at the side of their house.

While the family awaits the findings of the investigation, Mr McKoy has called for the security guard who assisted Jalisa that fateful night to come forward for them to personally thank him.

He is lobbying for the guard to be recognised for his selflessness.

As medical staff stood at a distance from the wheezing Jalisa, Karl said the security guard, who had no gloves or other protective gear, faithfully offered assistance without hesitation.

“I would nominate him as a hero. He needs to be a hero,” he said.

“Him never complain bout nothing, never say him cyaa lift her up or nothing,” he added.

According to the latest World Health Organization data published in 2018, there were 81 asthma-related deaths in Jamaica that year. That represents 0.45 per cent of health-related mortalities.

2. Parents and children should grieve healthily.