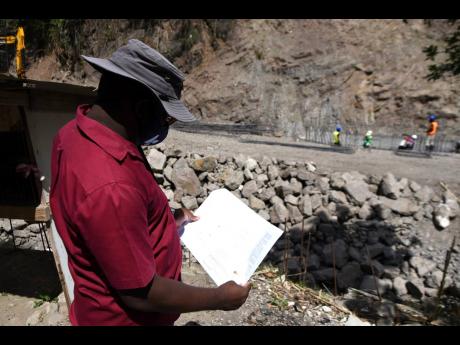 Kenyon Hemans/Photographer
Project Manager Orville Clarke looks over the blueprint as work progresses on the rehabilitation of a breakaway along the Gordon Town main road in St Andrew. The road was damaged during heavy rains last November and is now impassable to vehicular traffic.

Residents of Gordon Town in St Andrew are concerned that further deterioration could occur along the badly damaged main road even before the planned $195-million effort to repair a major breakaway has been completed.

Expressing doubts that the repairs will be completed within six months as planned, they told The Gleaner that the likelihood of them becoming marooned once more would remain high as further erosion of the hillside has occurred, worsening another slippage that also took place last November.

However, Stephen Shaw, communications and customer services manager of the National Works Agency (NWA), said that the agency was aware of the matter and that the engineers have been paying keen attention to it.

“We have decided not to touch it at this moment because if you are to touch it, [it] may very well come down. It looks stable, so for now, we are watching it,” he told The Gleaner.

Tania Brown is among residents claiming that the massive breakaway was because of a poorly engineered drainage system.

“When the rain fall, the river in a di road more than the river behind the house here. That is not appropriate,” said Brown.

Another resident, Yanique Campbell, lamented the $60-million investment in an alternative route via Savage Pen.

Arguing that the alternative route served no purpose to them, Campbell said that the money should have been used to address the other sections of the road that have been damaged.

And though dissatisfied with the pace of work to complete the 21.5-metre-high retaining wall, they are grateful that it has provided an income-earning opportunity.

Project Manager Orville Clarke of NF Barnes Construction said that outside of their expert workers, they have been sourcing labour from within the community.

The foundation of the retaining wall will not be as wide as planned because the initial layout was obstructed by a stone they have decided not to disturb. Thus, the width of the wall will be expanded as the height increases to acquire the 71 metres in length on the blueprint.

Clarke explained that the wall would be further supported using the method of scour protection, where boulders will be cemented around the foundation.

Given that the work is being done in the riverbed, the team is trying to move swiftly “before any heavy shower of rain”, aiming to pour the foundation by next Monday at the latest, said Clarke.

Karlene Carddock is contending that she was not asked permission for her property to be used to store material.

“I was only asked permission for the excavator to come through here,” she told The Gleaner.

She explained that the construction team has since packaged material by her pit latrine and has refused to remove it.

Shaw told The Gleaner that as far as he knows, a meeting was held with the owner of the property and the contractor, where they breached the gate to make way for the excavator.

He said that he understands that there are multiple houses on the lot, and as such, he will be looking into the matter.