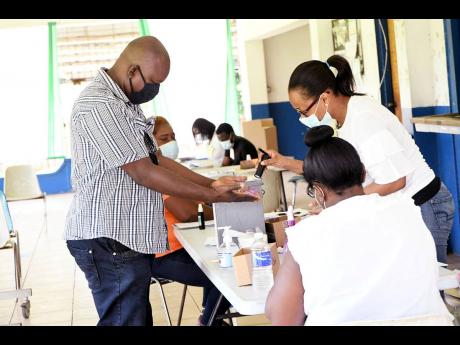 A senior opposition lawmaker raised concern on Wednesday that the integrity of Jamaica’s electoral process could be at risk if steps were not taken to replace the automated fingerprint identification system that is at the end of its useful life.

Julian Robinson, opposition spokesman on finance, questioned whether the Government had made provision in the Budget for the new fiscal year to replace the technology.

The system allows the Electoral Office of Jamaica to verify the identity of the elector who appears to cast his ballot.

In a meeting of the Standing Finance Committee of Parliament on Wednesday, Robinson, who was until November last year a member of the Electoral Commission of Jamaica, said that the software had done its time and needed to be updated.

“It goes to the heart of the integrity of our electoral system to have the ability to be able to verify that the individual that is voting is there,” he said.

Responding to the concern, Finance and the Public Service Minister Dr Nigel Clarke said that funds would be allocated in a subsequent financial year to replace the fingerprint system.

However, Robinson wanted to know what impact this would have on the electoral process if local government elections were held before the system was replaced.

Clarke, who sought advice from Director of Elections Glasspole Brown on the issue, reported that the system was being maintained by technicians locally.

“It is definitely towards the end of its useful life, but we believe that it still could be used,” Clarke said.

The finance minister also reminded his opposition counterpart that there was no allocation in the Budget for local government elections for the upcoming fiscal year.

However, the Government can provide those funds in a supplementary budget.

Parliament last year approved amendments to the Representation of the People Act to allow the local government elections to be deferred up to February 27, 2022.