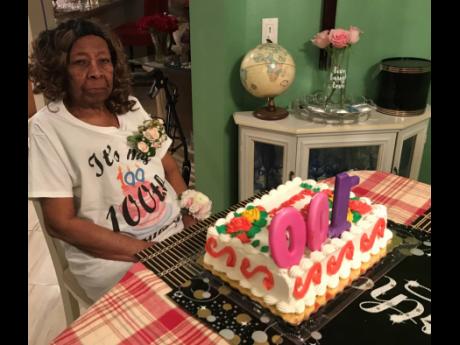 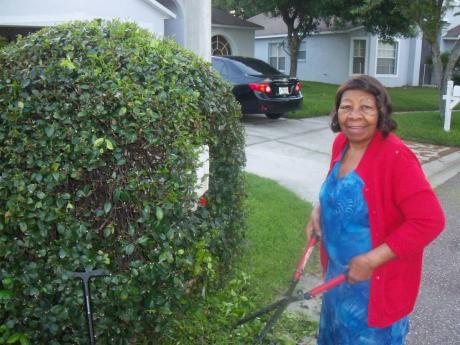 Contributed
Muriel Duncan in the garden. 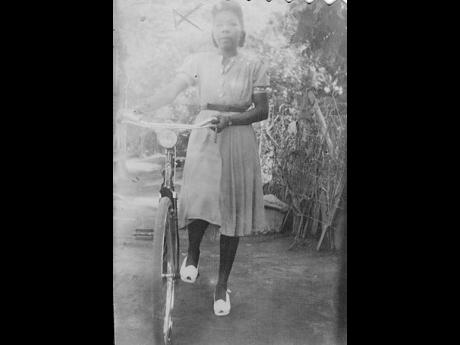 Contributed
Muriel Duncan poses for a photo before riding to her first teaching job at Point Hill Elementary in St Catherine. 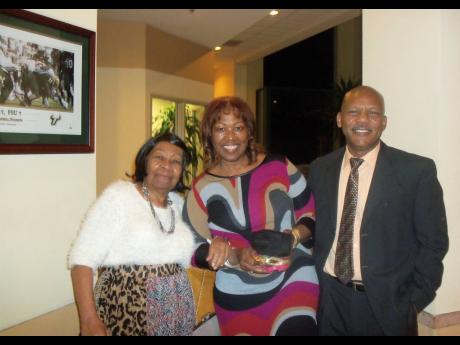 One hundred-year-old Muriel Duncan has lived a life dedicated to education and the work of the Lord.

“I’m fine, thank God. Just watching the TV and praising God for His mercy,” said a bubbly Duncan in a telephone interview with The Gleaner on Wednesday.

She grew up in Refuge, Trelawny, with both parents, until, and at the tender age of four, her mother died.

“My childhood was still quite happy because I had a loving father,” she recalled.

Her father, James Dunn, made it his point of duty to ensure that she got a good education and was raised in the fear of the Lord.

“He would always hold my hands and take me to church on Sundays and in the home, even if I fell asleep early, he would wake me up at a certain hour when he wanted family prayer. We had prayer regularly in the hall. Sometimes he would call on me to pray and I had to be prepared to do that,” she said, as she took a trip down memory lane.

In her adolescent years, she moved to Kingston to live with her sister and began attending Merl Grove High School.

During that time, she became a member of the nearby Rehoboth Gospel Assembly, following her baptism at age 12.

She recounted that many choruses were sung during services and ‘What a mighty God we serve’ remains one of her favourites.

Duncan attended Shortwood Teachers’ College where she was affectionately called ‘Born in di Bag’, as she was sure to win the sack race, among other track events, on sports day.

“I was always a winner, especially when it came to running in crocus bag,” she said with a giggle.

After years of being in the classroom at various institutions, she moved up the rungs of the academic ladder.

She chose teaching as a career because she wanted to make an impact on the lives of Jamaicans.

Duncan relished planning yearly activities for each school, organising trips to the beach as well as to King’s House, the official residence of Jamaica’s governor general.

In addition to her responsibilities at school, she took several adults under her wings and taught them to read as a means of improving their literacy and employability.

She saw the fruits of her labour when some of those people came back, requesting letters of recommendation to travel to England.

Young Duncan resided with a pastor and his family for her first teaching job at Point Hill Elementary School in St Catherine.

There was a break-in at the family home and Clarence Duncan was the policeman sent to investigate the incident.

The two developed a friendship that blossomed with each passing day.

Duncan got married to Clarence with whom she had one child, Dawn. She also shared a relationship with her bonus daughter, Fay.

In 1983, Duncan retired and moved to a new home on Garelli Avenue in New Kingston.

It was during her retirement that she started a prison ministry at Rehoboth Gospel Assembly.

“I visited the prison, encouraged them to believe in God and pray to God to forgive them of their sins and to become sons and daughters of God,” she said, adding that the prisoners looked forward to meeting with her.

For several years, up to 2012, Duncan celebrated her birthday within the walls of South Camp Adult Correctional Centre in Kingston.

She carried cake, ice cream and other food items for the prisoners to share in the celebrations and, in return, some gifted her with carvings and craft items.

Duncan willingly visited the sick and shut-in brethren in hospital or at home and she believed it was also her duty to bring something they would appreciate.

On her birthday, a young man called to extend his wishes and shared that she was the last person who was with his mother before she died.

Her daughter, Dawn Penn, told The Gleaner that her mom has dim eyes, arthritis in the left knee, wears hearing aids and moves around with a walker.

She admired how well she took care of others and though she was not financially rich, she blessed people with what she reaped from her garden.

“I used to call and she was never home. When she finally answered, she would say, ‘Oh, I’m just coming in from visiting so and so’,” she recounted.

“She was so dedicated to helping people that she was never lonely, even though she lived by herself while I was here in the US,” Dawn said, adding that her mom migrated to live with her in Florida when she was 92.

Her daughter believes that her spirit of giving and attitude of taking everything to God in prayer have contributed to the longevity of her life.

The Jamaican admitted that she is a late sleeper who spends her days reading the Bible and watching the TV.

A couple years ago, when she could move around without the help of a walker, she spent a lot of time outside trimming the hedges and planting pineapples and pumpkins.

“God has been exceptionally good to me, to keep me alive at 100 years old. So I will continue to sing praises to God and as long as I can move around, I will encourage others to love the Lord,” the centenarian remarked.