‘WE ARE AT WAR’ - Lockdown lobby loud but businesses resist call 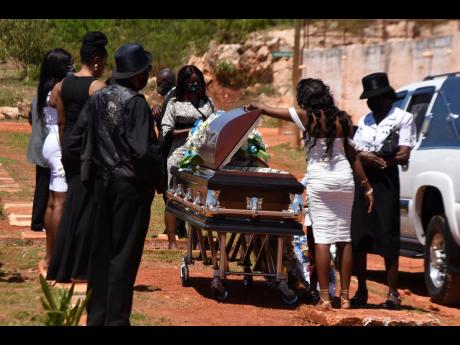 Kenyon Hemans/Photographer
A woman takes a final look at the deceased before a burial at Meadowrest Memorial Gardens in St Catherine on Saturday. A two-week ban on burials, viewed as potential superspreaders of COVID-19, takes effect today.

With anxiety heightening as Jamaica’s coronavirus infections skyrocketed Saturday to a record toll of 723 cases, private-sector leaders are resisting calls for a national lockdown. That appeal grew louder on Sunday as the nation grappled with more...

With anxiety heightening as Jamaica’s coronavirus infections skyrocketed Saturday to a record toll of 723 cases, private-sector leaders are resisting calls for a national lockdown.

That appeal grew louder on Sunday as the nation grappled with more than 1,200 cases over two days.

As hospitals buckle under the weight of a bed space and oxygen crisis, councillor of Mandeville, Jones Oliphant, framed the battle against the highly contagious virus in almost apocalyptic terms.

Oliphant described the predicament as “a disaster” and chided the Holness administration for waiting too long to flatten the curve. Only a total lockdown of the country will spare the health system from total collapse, he said.

The Mandeville councillor warned that the routine tightening of the islandwide curfew – the deadline was revised downwards from 10 p.m. to 8 p.m. a week ago – no longer bore any influence as the curve was not being flattened.

“We have to control the movement of people despite what people are saying about the Constitution and freedom of movement. What would freedom to do as you like then mean when the entire country is sick?”

Saturday’s record one-day total followed Friday’s 527 infections as private labs ramped up testing, helping to give a truer picture of the volume and intensity of community spread that was first cited last August.

Kingston and St Andrew recorded the highest volumes on Saturday – with 265, followed by St Catherine with 141. But the scale and unpredictability of the dilemma was evident in Portland, where its one-day cache of 58 cases represented almost 10 per cent of the eastern Jamaica parish’s aggregate total for a year.

But the Private Sector Organization of Jamaica (PSOJ), the Jamaica Employers’ Federation (JEF), and the Jamaica Manufacturers and Exporters Association (JMEA) said that while they are concerned about the escalation in infections, they are urging the Government to rethink its enforcement measures in a bid to curb further spread.

“With the increasing cases, high positivity rate, and our public-health infrastructure being overwhelmed, a review of the current approach needs to be done,” said Keith Duncan, president of the PSOJ.

Jamaica has imposed lockdowns on a limited scale – mainly in specific communities like Bull Bay, Sandy Bay, and Corn Piece – with the widest crackdown on St Catherine in 2020 when the Alorica call centre triggered an explosion of cases.

At the emergence of the dreaded coronavirus in March 2020, Jamaica was lauded by the World Health Organisation (WHO) for its containment strategy of the pandemic that shuttered the global economy, but the Andrew Holness administration has been taken to task for the unpopular decision to hold a general election last September.

JMEA President Richard Pandohie said that he was banking on today’s scheduled delivery of Jamaica’s first batch of AstraZeneca vaccines as what could save the country, which is now at a tipping point.

Pandohie urged more companies to allow their workforce to operate from home, raising the ignoring of social-distancing and mask-wearing protocols on public transportation as a possible factor of the spike. He also wants the Government to get serious with enforcement.

“We are now caught between a rock and a hard place. The only way out, the major opportunity out, is the vaccine,” Pandohie told The Gleaner.

And David Wan, president of the JEF, believes that the Government must be more strategic in fighting the virus. He argued that a “source analysis” needed to be undertaken.

“... If you can find the big drivers behind the increase and deal with those geographics and those workplaces, I think that is a better approach than to go to a national lockdown,” the JEF boss said.