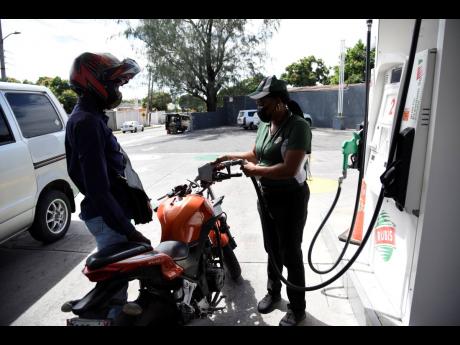 Nicholas Nunes/Photographer
A motorcyclist watches as an attendant pumps petrol at a RUBiS service station in Vineyard Town, Kingston.

The recent sharp rises in the price of fuel appeared genuinely outside of the control of the state-owned oil refinery, said Richard Pandohie, president of the Jamaica Manufacturers and Exporters Association (JMEA).

At the same time, Petrojam General Manager Winston Watson says the volatility in the oil market globally could lead to further increases in the price of petrol.

Pandohie, who is also the chief executive officer of Seprod, told The Gleaner on Monday that several factors on the global market were driving the demand and subsequent increase in the price of oil.

The US$1.9-trillion stimulus package in the United States will push prices up further, said Pandohie.

And, Watson attributed the volatility in the oil market to geopolitical issues involving Iran, Saudi Arabia, and the US. He said that oil facilities interrupted by freezing conditions in Texas would take some time to become fully operational again.

He said there was strong speculation that oil prices could increase to a high of US$3 per gallon for the first time since 2014.

If the prices go up to US$3 per gallon, the US Gulf Coast reference price would jump, said Watson, leading to further increases in the price of fuel locally.

The US Gulf Coast reference cost, which Petrojam uses as part of a mechanism to price finished products, has been increasing consistently since December 2020.

The Houston Chronicle reported on Monday that four of the largest refineries in Texas had detected significant damage from the deep freeze that impacted the state recently.

The refineries are expected to undergo repairs in the weeks ahead, which could mean the likelihood of prolonged fuel shortages that could affect the country.

“With the volatility now in the marketplace, I am anticipating that we are going to see prices go up and down as per the US Gulf reference,” Watson said at a press conference on Monday to address the vexed issue of rising fuel prices.

Watson said that the Organization of the Petroleum Exporting Countries, which sets crude oil prices, has decided not to increase its production. Further, he said that US gasolene demand jumped last week to the highest levels since COVID-19 pandemic last year.

In addition, an attack on an oil facility in Saudi Arabia Sunday night drove up the price of oil by 71 per cent.

Watson said that pricing at Petrojam was transparent and based on market references that the state-owned refinery has to follow in the industry.

He said that Petrojam’s pricing mechanism allowed for “some amount of smoothing of the price using the weekly average” to ensure that the volatility of the US Gulf Coast reference prices does not have an immediate impact on local prices.

Discussing the effect that the spike in fuel prices was having on the business sector, Pandohie noted that while businesses had no control over fuel hikes, they could reduce wastage and improve productivity.

He said from December 2020, the whole input cost of production had increased tremendously.

“Everywhere you look, whether raw material, whether packaging, whether wheat, whether fuel, everything is going up,” the JMEA president said.

“We are just digging deeper into the organisation trying to find other ways to improve our productivity, reduce our cost and that’s how we are trying to offset it.”