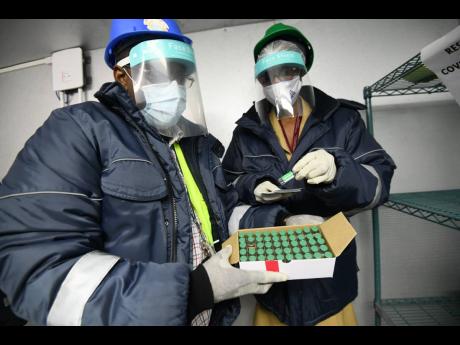 Despite launching a broadside at those who have flagrantly flouted safety rules amid a surge of COVID-19 cases, Prime Minister Andrew Holness has held back from imposing further restrictions amid a lingering lockdown debate.

Thirteen of 22 hospitals in Jamaica have exceeded the isolation bed occupancy redline of 84 per cent and 12 of the 13 are at 100 per cent or greater of capacity.

As Jamaica tallied a new one-day record total of 878 infections on Sunday, Holness appeared to offer justification for his restraint.

“My conscience is clear that we have done all that we can in balancing lives and livelihoods. At this stage, the equation and the balance have now shifted to saving lives,” Holness declared at Jamaica House press briefing on Monday.

The prime minister sought to cast Monday afternoon’s arrival of 50,000 doses of the AstraZeneca vaccine as a light of hope for Jamaica at its “darkest hour”.

Hours after a video of a man identified as Stephen Whitter chastising policemen went viral, Holness warned that the security forces would crack down on lawbreakers. Whitter was charged on Monday.

“There are those who would wish to challenge the authority of the State in ways that even the most liberal Jamaican would believe is a threat to the rule of law and the order and discipline and indeed the justice of the society,” Holness said.

In keeping with the World Health Organization recommendations, public-health workers, including doctors and nurses, will get the jab first, followed by the police and army.

“The pressures have already started, but I’m committed to ensuring that the distribution of the vaccine does not fall in this category of nationally important goods to be distributed, where people break the line and because of connections, they get,” Holness said.

Just over 17,000 health workers will start receiving the vaccine on Wednesday.

Jamaica will receive another 14,400 AstraZeneca doses through the COVAX Facility next week.

The country is set to receive another 100,000 doses of AstraZeneca from the private sector by month end.

The vaccination roll-out comes as Jamaica battles to curtail community spread of the virus, which up to Sunday had claimed 454 lives. Total infections have topped 26,900.

Hospitals have been operating under significant pressure as oxygen supplies evaporate.

“The arrival of the vaccines is a good start to what I consider to be the most effective arsenal or effective response to COVID-19 and the virus,” said Health Minister Dr Christopher Tufton.