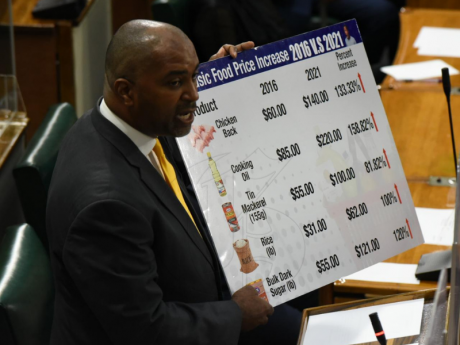 Robinson: Jamaica is spending far less than other Caribbean countries and will find itself in problems if the spending does not increase.

The Opposition is pushing for the Government to spend $21.5 billion more to accelerate economic growth.

In his contribution to the Budget Debate, Julian Robinson, the Opposition spokesman on finance said the additional expenditure would be approximately 1 per cent of Gross Domestic Product.

The Government is planning to spend $830.78 billion to finance the affairs of the country in the 2021/22 fiscal year.

But Robinson says the additional spend can be accommodated.

“That can be funded if we relax our fiscal rules and look at our primary balance and look at reducing that balance,” he said.

The Opposition spokesman noted that the Budget, as laid out seeks to achieve a real GDP growth of 5.2 per cent.

But he contends that the growth will have to come from the domestic market and says spending more would accelerate the pace.

Robinson said that Jamaica is spending far less than other Caribbean countries and will find itself in problems if the spending does not increase.

“If you look around the world at countries responding to this crisis, many of them are running deficits. They do this not because they want to be irresponsible but because of the scale and severity of the crisis,” Robinson told the Parliament on Thursday.