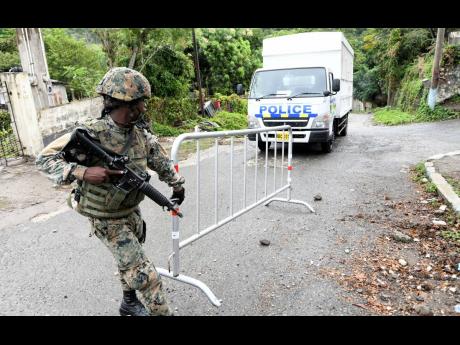 Rudolph Brown/Photographer
A soldier moves a barrier to allow the police to leave with detainees during a joint operation in August Town where five men were killed on Wednesday.

“I don’t want to die today.” Those were the soft-spoken words of Bedward Gardens resident Akeem ‘Duppy O’ Thomas on Wednesday during a despairing phone call to The Gleaner shortly before negotiations for his surrender...

Those were the soft-spoken words of Bedward Gardens resident Akeem ‘Duppy O’ Thomas on Wednesday during a despairing phone call to The Gleaner shortly before negotiations for his surrender to the security forces foundered.

Hours earlier, five men, reputed to be his cronies, were slain in a hail of bullets in the eastern St Andrew community of August Town.

In a call to the newspaper, Thomas sweated with fear as his family tried to broker his handover.

Thomas, the police say, has been on their radar for his alleged role in murders and shootings in the St Andrew Central Police Division.

The negotiations were lengthy, and at times, the police appeared to be losing patience.

Deputy Superintendent of Police Gary Chambers, who spoke with Thomas on one occasion, sought to assure him that his rights would be respected and that he would not be harmed.

Chambers was frank, though, telling the hunted man that he should surrender with his weapon.

Thomas was heard giving the police his word that he was ready to turn himself in but requested that his babymother and sister be part of the process.

Thomas told our news team that he was being targeted because of his “family background” and that he has not had a chance to get a lawyer.

Five men were killed and seven weapons seized by the security forces during the predawn operation on Wednesday.

A member of a joint police-military team was injured during the gun battle.

The police and military began the Bedward Gardens operation shortly after 3 a.m. in search of men who had attacked a military checkpoint earlier this week.

Thomas said he was in the community at the time of Wednesday’s deadly operation but claims he was unaware of what was happening.

According to Thomas, one of his cousins was killed in the operation.

“Mi just hear say man dead and mi hear bare people a scream and a bawl and somebody call me and tell me say dem a look fi you fi kill yuh. Everybody a call me and a tell me,” he told The Gleaner.

“Mi suppose to have a cousin weh mi hear say dem tek out of him house and kill him. Mi hear him a scream … . Mi call and dem say him dead,” added Thomas, his voice cracking.

But police sources have dismissed Thomas’ narrative of innocence and ignorance, saying he is a key player in the community.

A senior cop, who requested anonymity because he was not authorised to speak to the media, described the 19-year-old as “the wickedest one”.

During the back-and-forth dialogue, Thomas told The Gleaner that he was unarmed.

After the negotiated surrender fell through, the police conducted house-to-house searches in their bid to locate the other suspects.

Three men were arrested and taken into custody.

The police said a gun handle was found in the yard of one of the men.