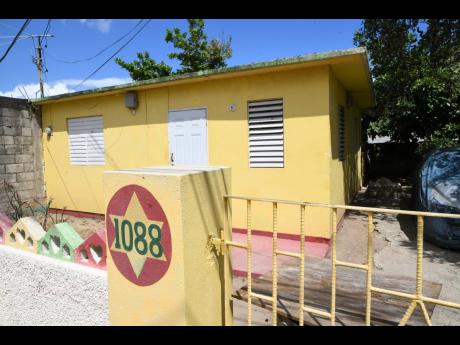 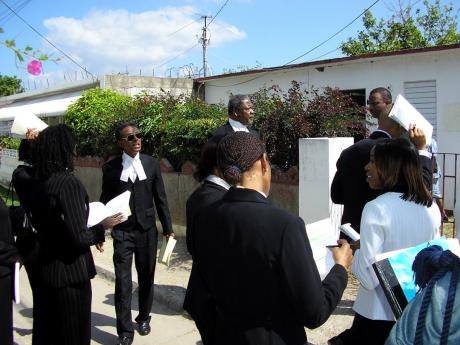 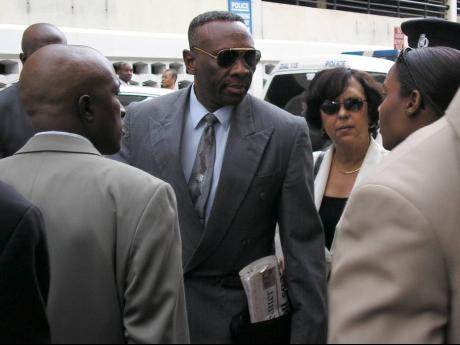 File
File Senior Superintendent of Police Reneto Adams (centre) leaves the Home Circuit Court on January 17, 2005 after turning out to support his colleagues charged with the Braeton Seven murders. 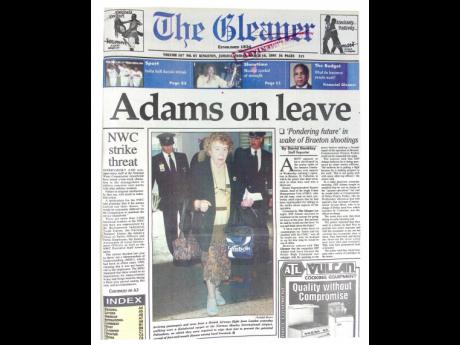 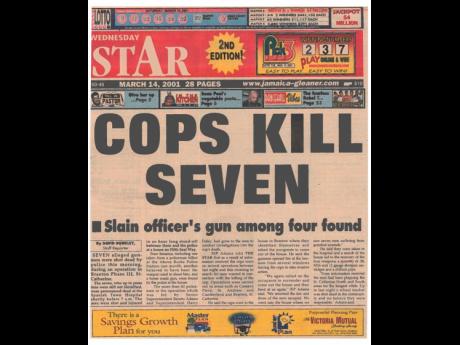 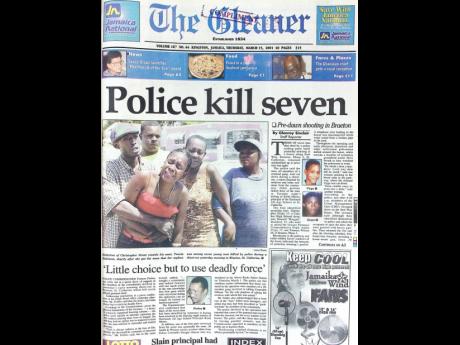 After almost two decades of remaining vacant, the death house in Braeton, St Catherine, where seven men were controversially killed in a police operation exactly 20 years ago, now has its first occupant. Rudolph Lewis, a Rastafarian returning...

After almost two decades of remaining vacant, the death house in Braeton, St Catherine, where seven men were controversially killed in a police operation exactly 20 years ago, now has its first occupant.

Rudolph Lewis, a Rastafarian returning resident who was overseas when the deadly operation unfolded, told The Sunday Gleaner that he can feel the dead men’s presence in the Lot 1088, Fifth Seal Way, Braeton Phase Three home.

“The place deh yah and it was available,” he said, explaining his decision to move into a building where many have feared to enter.

“Mi get in a some problems [overseas] so mi just come back home. At the time, me never have anywhere to live and you nah pay attention to certain things. It nah physically harm you,” said Lewis.

“Sometimes mi feel dem presence, but mi nuh really too think ‘bout it. Me in a di house now, me nah pay dem no mind. Dem still come and do weh dem a do. Mi just go through and cook mi food and eat mi food,” an unbothered Lewis, the sole occupant, explained.

Two decades on, he said that the incident is still a hot topic.

“Mi hear say a some young, likkle youth, enuh. The oldest a mussi 20 and dem just get mix up in a things like that and the next thing you know the house bruck down on them. My pickney could have been here ‘cause some of them never bad, enuh, a just the bad one dem a follow. You know how youth stay,” Lewis said.

“People talk and tell me wah gwan ... . A since me come out here mi hear what happen,” he told The Sunday Gleaner, admitting to being terrified at some of the things he has heard.

Indeed, the incident had rocked the entire country.

An elderly resident recalled the early-morning operation on March 14, 2001, when cops from the then Senior Superintendent Reneto Adams-led Crime Management Unit (CMU) and the St Catherine South Police stormed their community.

“Is about 5 o’clock when it a happen. The whole place block. The roads blocked off with police and everything, whole heap of police because they said notorious persons were inside the house,” he told The Sunday Gleaner. “We hear say the youths dem vicious and thing so the police can’t take no chances.”

Hartlands All-Age School Principal Keith Morris had been shot to death in a robbery attempt hours leading to the Breaton Seven tragedy, and investigators theorised that the perpetrators were among the dead.

“These were the men that did it,” Adams reportedly told residents then.

The police also said four firearms and 29 rounds of ammunition were taken from the house.

The police claimed that they came under fire as they approached the small house and returned fire from outside, and by the time they gained control of the house, all seven suspects lay dead.

Residents, however, said that some of the suspects were alive when the police captured them.

At the request of the relatives of the Braeton Seven, Amnesty International sent Danish pathologist Dr Peter Leth to observe the autopsies performed in March 2001.

Leth’s conclusion, after considering the pattern of wounds on the bodies, was that the seven had been extrajudicially executed: “What was striking was the many head wounds. Out of 37 gunshot lesions I observed, there were 15 to the head. It seems not possible that this pattern of lesions could have occurred by just random shooting.

“There’s no doubt … that it is a homicide; the question is, was it justifiable homicide or not? As I see it, these killings were extrajudicial executions. It seems quite clear that the police explanation about what happened cannot be correct,” he said.

“From the contradictory police statements and the lack of damage to the property, it is more likely that the police forced their way into the building without warning and took the occupants by surprise (the whole point of mounting this type of operation at this time of the night).

“The striking statistic from the autopsy report is the 15 shots to the head out of a total of 46 fired into the seven bodies: an extraordinary ratio. Furthermore, 6 out of the 7 dead had shots to the head: an unbelievable ratio. Last, the fact that none survived is unusual. It takes a lot to kill a human body quickly, within minutes; it would be quite reasonable to assume that at least two or three would survive an attack such as this and recover from their wounds in hospital. Normal ratios of dead to wounded is 1:3,” he pointed out.

“In a firefight such as the police described, the injuries suffered by Reagon Beckford are more the norm and what I expected to find about the other six. The fact that the others all died of gun shot wounds to the head is highly suspicious and more in keeping with summary executions,” he also concluded.

The incident is one of the major black eyes which led to the 2003 disbandment of the Adams-led CMU, which had reportedly been involved in at least 40 killings since then Prime Minister P.J. Patterson set it up in 2000.

In February 2005, nearly four years after the seven men were killed, Constables Leighton Bucknor and Miguel Ebanks, Corporals Wayne Constantine and Linroy Edwards and Sergeant Raymond Miller were freed of murder charges in relation to the incident.

During the trial, then Deputy Superintendent Cornwall ‘Bigga’ Ford testified that when he went to the premises at about 6:45 a.m. on the day of the incident, he went inside the house where he saw bullet holes in windows and on the walls. He said he observed a curtain in front of the kitchen window with bullet holes with blackening around the holes.

Ford said he removed the curtain, examined the kitchen window and found bullet holes on the window, which indicated that shots were fired from both inside and out.

He also said that he picked up 15 spent shells inside the house.

Under cross-examination, Ford said based on his experience and training, the blackening around the holes meant that shots were fired from inside.

Rising from tragic past

“It never really sound good,” said current house occupant Lewis of tales of the deadly operation as he spoke with The Sunday Gleaner recently. “It kind of sad for the family because me is a close relative of the family. The lady who own the house, one of the youth [killed] is one of their own son.”

He told The Sunday Gleaner that nobody wanted to reinhabit the home, and having spoken to the owners and settling on some agreements, he was given the opportunity.

Despite believing the spirits of the Braeton Seven still roam the house, Lewis is adamant that the living are more bothersome than the dead.

“They are afraid, but me a Rasta and we never fear nothing but God, so it just come in like say if a person die, dem nah go bother you,” he said.

He said that he sometimes wishes that the tragedy hadn’t occurred so he would not have to explain his presence and actions to anyone.

“Cause me deh ya now and me is a man weh love cook in a night, and people will all a walk pass and say, ‘A same so di youth dem use to cook a night time, enuh’. More time me say, ‘Mi a gwaan cook for me and them’,” he explained.

A believer that spirits will interfere with food left unattended, Lewis ensures he uses peppers when cooking to ward them off.

He has also changed the appearance of the house, adding Rastafarian colours and symbols to the boundary wall and remodelling the inside.

“Mi change out everything. You did have two rooms, mi just turn it into one – open it up and give it a look,” he told The Sunday Gleaner.

He had his work cut out to get the place looking liveable again and shed the haunting image of the horrors which unfolded there in 2001.

“This wall that was here was like a strainer – whole heap of gunshot and all kind of blood – so mi just bruck it down,” he said. “Dem (bullet holes) did in a the window. All dem wall here so a something weh mi seal and putty out. Dem fly through the window and land in a the wall. I paint over them so maybe is just the little markings.”

Residents of the area are glad to finally see someone living at Lot 1088 again.

According to a female resident, Lewis’ residing at the death house has been allowing fears to subside somewhat.

Some recalled that some of the boys grew up in their eyes and it was still painful to talk about the incident.

“Nobody who knew them and grew with them really like to talk about it. Others will ask and say what they know or heard,” one resident said.

The Sunday Gleaner was told that a brother of one of the deceased usually hosts a memorial of sorts on the anniversary of their deaths.

Head of the St Catherine South Police Division Senior Superintendent Clive Blair could not be reached for a comment.

The now-retired Adams declined a Sunday Gleaner invitation to speak on the Braeton Seven incident.

Last December as the United States imposed via sanctions on him and five other former members of the CMU over “gross human-rights violations” over another controversial operation in Kraal, Adams said that he doesn’t regret his approach to policing, even as he insisted that he has never breached human rights or taken the life of an innocent person.

“I am accused of many things, but I walk free all over Jamaica. And man, woman and schoolchildren always saying, ‘Adams, we want you back.’ Everybody calling back for Mr Adams. People saying they want 10 Adams right now because of the crime situation in the country,” the former crime-fighter said.