Dread for the disabled 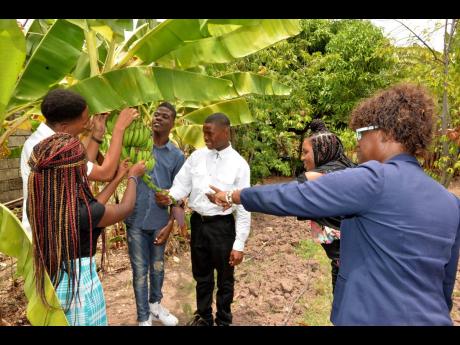 File
Managing Director of the Abilities Foundation Susan Hamilton (right) and some students tend to a bunch of bananas at the organisation’s farm located at Constant Spring Road in St Andrew in this 2018 file photo.

Persons with disabilities (PWDs) continue to rank among the hardest hit by the pandemic as the Caribbean Policy Research Institute (CAPRI), in its latest study, points a magnifying glass at the efficiency of the island’s social safety net, and the shortcomings of institutions such as the Abilities Foundation, charged with protecting the island’s most vulnerable.

The study comes as the island endures a painful economic pummelling from COVID-19, which has infected 29,912 Jamaicans – at least 13,763 of which are active cases up to Friday – and which has transformed employment cultures around the world.

The island’s social safety net broadly speaks to measures and institutions implemented by the Government “to ensure that all citizens, who fall within the ‘poor and vulnerable categories’ are adequately covered by law” – the disabled included. But according to CAPRI researchers, since its inception in 1992, the state-run Abilities Foundation has enrolled an average of only 93 youth with disabilities per year.

“This is 0.3 per cent of all PWDs between the ages of 15 and 24,” noted the study, suggesting that based on geography, the Constant Spring Road, St Andrew-based Abilities Foundation is outside the reach of most of its intended target groups islandwide.

“Most of its beneficiaries come from feeder secondary institutions that cater to persons with disabilities, PATH households, and state care. However, the majority are from the Kingston Metropolitan Area, which only contains one-third of persons living with disabilities.”

“More than half of the PWD population reside in rural areas, where PWD youth are deemed to be even more vulnerable because of the limited availability of resources there. As such, a large and crucial portion of the foundation’s intended beneficiaries are outside the organisation’s reach, and the organisation and its programmes are out of the reach of young PWDs,” read a section of the soon-to-be-released study dubbed ‘Come Meck Wi Hol’ Yuh Han’: The Components of an Effective Social Safety Net for Jamaica’, a copy of which was seen by The Sunday Gleaner.

The study will be officially launched on Thursday.

Even more damning is the limited number of persons with disabilities who have managed to maintain sustainable, long-term employment, even after completing training through the Abilities Foundation, the study outlined.

“In 2019, forty-three trainees graduated, but only 16 were placed in employment programmes. In that year, only one graduate in the year under review was able to attain permanent employment. These numbers are unimpressive. Further, the extent to which they point to a material change in the situation of PWD youth would have to be measured against the quantum of PWD youth in the island,” it pointed out.

“At a rate of reaching less than one per cent of these youths, these achievements have little meaning beyond the individual benefits that would have accrued to a few participants. Further, this evidence suggests that the attainment of skills mostly result in short-term employment and only for some youths,” it continued, adding that the onset of the COVID-19 pandemic last year also foiled the assistance provided to this group.

Nevertheless, the study continued, as the only cross-disability institution that caters to the skills training and development of disabled youth, the Abilities Foundation is vital to increasing economic inclusiveness, especially in the context of the 2014 Disabilities Act, which outlines standards for engaging disabled individuals, particularly in the workplace.

Efforts to contact Abilities Foundation Managing Director Susan Hamilton for comments on the study were unsuccessful, but at least one educator is dissatisfied with the level of support given to the community, particularly children and young adults, who must learn to cope with their disabilities while taking care of themselves.

“There is still a stigma about disability in Jamaica, especially in the workplace, and although there has been success, there is still a lot of room for improvement with regard to employment. People think they might be intellectually challenged and so they are incapable, but I can tell you, once they are trained, they can perfect whatever it is they are taught,” said Angela Bowen-Stewart, principal of Genesis Academy, which caters to disabled students from ages 12 to 21.

“My students have been very successful. However, what we have done is to work with the HEART programme to ensure they get the necessary work experience. After that, they are ushered into a job. We have one working at the airports, another at Roots FM,” she said, amplifying aspects of CAPRI’s study highlighting the limited work opportunities afforded to most PWDs after training.

In the meantime, CAPRI is calling for a review of Jamaica’s current social-protection system, and ultimately its governing archaic Poor Relief Act, last amended in 1973, when terms such as ‘almshouse’ were commonplace.

The study also examined the offerings and performance of the Programme of Advancement Through Health and Education (PATH), the main social-assistance programme, pumping cash transfers to the poor and pensions for the elderly; as well as the National Insurance Scheme, the National Health Fund, and the Youth Employment Training Programme, among others.

“Over the past seven years, Jamaica has performed remarkably well in establishing markers of economic growth. However, no amount of economic growth guarantees equity in the distribution of economic gains ... . The unequal impact of the pandemic has made clear the need for a more robust and more effective social safety net.”