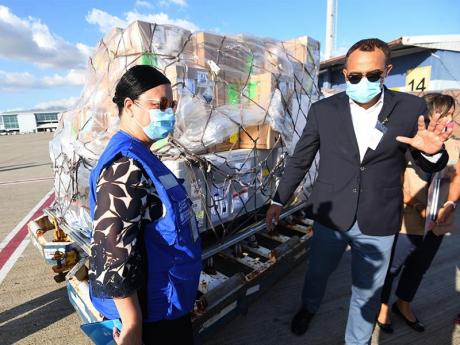 According to Tufton, Jamaica’s death rate is now 1.6 per cent of total infections.

That is below the global average of 2.2 per cent.

Jamaica’s highest daily death tally of 12 was recorded on March 10.

Tufton was speaking at the Norman Manley International Airport on Monday afternoon shortly after the arrival of the first shipment of 14,400 doses of vaccines under the COVAX facility.

Jamaica is expecting a total of 124,800 doses through COVAX.

Health Minister @christufton says beginning this week, Members of Parliament over 60 years will start receiving the #COVID vaccine. At the same time, he says he and the Prime Minister will receive their vaccines "not too long" from now, likely by early April. #GLNRToday pic.twitter.com/tyIq9dRs06

The remaining allocations are to be delivered by May 2021.

On March 8, Jamaica received its first 50,000 doses of vaccines, donated by the Government of India.

The country started administering the vaccine on March 10, exactly one year after the first case of the virus was confirmed in the island.

Jamaica, like many other developing countries, joined the COVAX facility as part of a strategic approach to ensure access to safe vaccines at a reduced cost.

This price is negotiated for 16 per cent of the population and represents phase one of Jamaica’s vaccination rollout plan, the Health Minister has said.