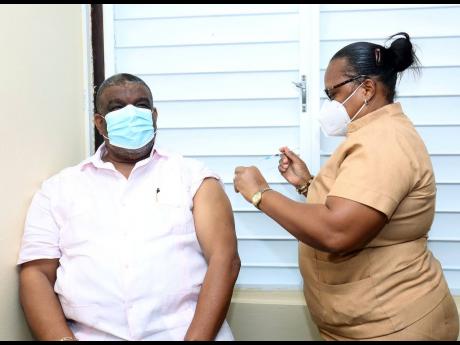 File
Errol Greene of the Western Regional Health Authority is vaccinated at the Cornwall Regional Hospital in St James on March 10 by by Angella Stennett-Douglas. A probe has been launched into a missing vial of 10 doses of the AstraZeneca vaccine.

Several staffers within the Western Regional Health Authority (WRHA) have been reassigned after an investigation was launched on Tuesday into 10 doses of AstraZeneca vaccine that went missing from the Cornwall Regional Hospital in St James.

The vial was discovered to be missing after standard checks were conducted during the vaccination process, the ministry said in a late-evening press statement on Tuesday.

Investigators are reviewing CCTV footage that may prove helpful in identifying those who may be responsible for the breach.

A probe is also under way into the circumstances in which six doses of AstraZeneca were accidentally damaged at the Lucea Health Centre in Hanover where a vial is believed to have fallen from the hand of a worker. A similar case in Westmoreland is also under scrutiny.

Errol Greene, regional director of the WRHA, told The Gleaner on Tuesday that only a limited number of personnel were authorised to handle the vials.

“We have no information yet if it has been stolen or if it was misplaced, but I can confirm that one vial has gone missing and we are investigating the matter,” said Greene.

“I doubt that allegation, but if it were to happen, those who are held responsible will be brought to book very severely because that would be a major breach of the trust that we would place in our medical team to deliver vaccines in a very equitable way,” said Tufton.

On Monday, Jamaica received 14,400 doses of the COVID-19 vaccine from the COVAX Facility. That distribution followed a gift of 50,000 doses from the Indian government.