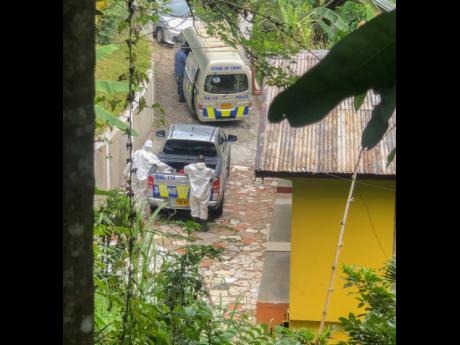 Photo by Andre Williams
Crime scene detectives at the home of Andrew ‘Oh Lord’ Andrews in Mount Ogle, St Andrew, yesterday, where his remains were believed to be discovered in a shallow grave.

When Andrew ‘Oh Lord’ Andrews’ grandson dug a hole and placed a sculpture of two bodies beside it, residents of Mount Ogle in St Andrew were baffled. Little did they know it was an omen for what was to come. The grandson was yesterday arrested...

When Andrew ‘Oh Lord’ Andrews’ grandson dug a hole and placed a sculpture of two bodies beside it, residents of Mount Ogle in St Andrew were baffled. Little did they know it was an omen for what was to come. The grandson was yesterday arrested after remains believed to be Andrews’ were discovered in a shallow grave in his backyard.

Andrews, 62, had been reported missing since February 7, but it was when he reportedly confessed to burying his grandfather in their backyard that investigators got a major breakthrough in Andrews’ sudden disappearance.

“About four months now him dig the hole up a mi place. I always see him sit down. Him never talk to me yet. One morning after the rain fall, mi see him sit down out deh and a dat me see … it strange yes, but we never did a pree say dat,” the property owner told The Gleaner yesterday. “Dem always in a war, enuh, but nobody knew he would do that.”

The property owner said that he was disturbed by the sight of the hole with the figures.

“I moved it because I was doing construction. I didn’t like see it, suh I dug up the ‘man’ dem,” he said, adding that he believes that the grandson had been planning something.

Andrews’ grandson reportedly took cops to the site of the shallow grave on Wednesday, telling them that he had buried his grandfather.

Yesterday, as crime scene investigators worked to exhume the body, Andrews’ mother and daughter, along with curious community members, looked on anxiously.

Andrews’ mother and daughter watched with depressed looks on their faces from the verandah of the house in which he lived with his mother as crime scene investigators conducted the exhumation.

His eldest daughter said that she had a headache and had not been hoping to find her dad, who was made redundant after working at a nearby factory for years, in this state.

“He stopped working and did farming. He got a little work now and then,” she said, describing him as a great dad.

Stumped that that her nephew could have killed Andrews, she could not find the words.

“I don’t know what to say,” she said forlornly.

Neighbours said that they knew very little about the suspect.

“We just see him come and a stay wid him, but him and him couldn’t ‘gree, and him send him weh. So it look like him come back,” one neighbour said.

Another said that since the grandson was occasionally seen at the house, him digging a hole did not arouse suspicion.

“Dem see him a dig. Nobody nah pay him no mind. It come in like something him a plant,” said the neighbour.

A strong odour, which poisoned the air, especially when the wind blew, also did not alert them to the tragedy that had unfolded.

It took roughly two and a half hours and a team of six crime scene excavators to unearth the decomposed remains.

“Some bones were found in a neighbouring yard. We only retrieved the upper body from that grave, so we will be taking that into evidence,” an investigator told The Gleaner.