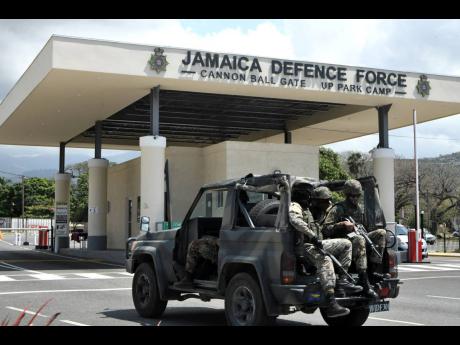 Rudolph Brown/Photographer
Soldiers return to Up Park Camp, the headquarters of the Jamaica Defence Force, on Sunday. Complaints against army rose by more than 200 per cent, year-on-year, in 2020.

Complaints of misconduct by the army and police force skyrocketed last year as the Holness administration increased its reliance on states of emergency (SOEs) and joint patrols to rein in crime. But analysis does not suggest that the widening...

Complaints of misconduct by the army and police force skyrocketed last year as the Holness administration increased its reliance on states of emergency (SOEs) and joint patrols to rein in crime.

But analysis does not suggest that the widening strategy of SOEs, on average, contributed to adverse engagements with the public.

Data obtained from the Independent Commission of Investigations (INDECOM) show that for 2020, there was a 207 per cent increase in complaints made against the Jamaica Defence Force (JDF) when compared to 2019.

It is the highest increase of all the state agencies investigated by INDECOM.

Grievances against the Department of Correctional Services increased by 25 per cent from 72 in 2019 to 90 in 2020.

Retired Colonel Allan Douglas said that increased operational activity was likely a key factor in the rise in complaints.

The JDF has carried out missions, sometimes in conjunction with the JCF, with SOEs imposed in 10 of 19 police divisions up to mid-August 2020. The measure, which elapsed weeks before the general election in September, was credited by the Government for reduced murders in those zones, but it had negligible effect on aggregate killings islandwide.

Deputy Prime Minister Dr Horace Chang said the Government was unlikely to reimpose SOEs until the court rules on a pending appeal on constitutionality.

“The INDECOM data are very interesting and have to be of concern to not only leadership in the JDF and JCF, but, indeed, all Jamaicans,” said Douglas.

Last Friday, news broke that two male privates, who are accused of raping a female colleague at the army’s Up Park Camp headquarters on March 11, are scheduled to answer charges on Monday, March 29.

The accused are Michael Grant, 22, of St Mary, and Anuk Moncrieffe, 19, of St Catherine.

It is alleged that both soldiers, who wore hoodies, demanded money from the complainant and her companion and subsequently sent the male companion to get the cash.

It is further alleged that Grant had sexual intercourse with the woman against her will and forced her to carry out other sexual acts while Moncrieffe kept watch.

The alleged rape presents a crisis of values, Douglas said.

“The conduct reported on recently paints a picture of many of its members who have abandoned its Values and Standards, and in the process, destroying the public’s perception of a force with high standards of professionalism, individual behaviour, and self-discipline,” Douglas contended.

Pressed on whether the Jamaica National Service Corps had been a distraction for the JDF, Douglas said the new unit should be subjected to military law and values.

“I cannot imagine that it is a distraction and affects the operational effectiveness (core mission) of the JDF. The failing of any unit is a failure of leadership in ensuring standards and values are instilled and maintained,” the retired colonel told The Gleaner.

He said that recent black eyes to the JDF were warning signs for introspection and reform.

“There will be a disappointment, but not necessarily long-term damage to the public’s high regard for the JDF. The JDF cannot, however, continue along this path because the public’s regard will soon wither away!”

Businesses should close at noon to allow staff to do shopping.

Curfew begins at noon and continues until Monday, March 29 at 5 a.m.

Businesses must close at noon.

Curfew starts at noon until 5 a.m. on Tuesday, April 6.

Workplaces must close at noon

Curfew starts at noon until Monday, April 12 at 8 a.m.