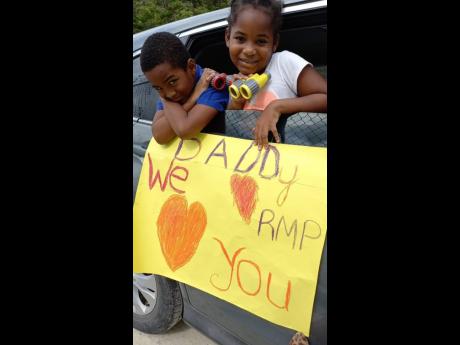 Photo by Janet Silvera
Ravi and Rebekkah Peters giving hope to their father, Richard Peters, who is in ICU at the Cornwall Regional Hospital with COVID-19. 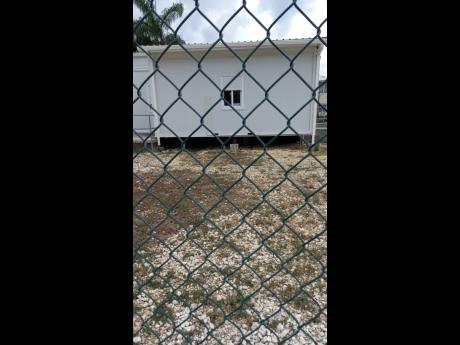 Photo by Janet Silvera
Richard Peters' window of hope that allows him to see his children behind a fence from ICU at the Cornwall Regional Hospital .
1
2

WESTERN BUREAU: Eight-year-old Ravi and six-year-old Rebbekah crave the embrace of their dad, Richard Peters, who remains critically ill in the Intensive Care Unit (ICU) at the Cornwall Regional Hospital. The two, who have a strong bond with their...

Eight-year-old Ravi and six-year-old Rebbekah crave the embrace of their dad, Richard Peters, who remains critically ill in the Intensive Care Unit (ICU) at the Cornwall Regional Hospital.

The two, who have a strong bond with their father, saw a ‘window of hope’ last Saturday when they went to the hospital. On Monday, they returned with artfully prepared cartridge paper emblazoned with the words, “Dad we love You”.

From a chain-link fence separating them from the ICU building, the youngsters wait for at least half an hour each day to see their father’s hands waving from the small window. Most days he raises his head, looks out, waves, but doesn’t have enough strength to remain up long.

“They had planned on tying the card on the fence, but it looked like it was going to rain, so they hung it on our vehicle for as long as we were there,” their mother, Nina Peters, told The Gleaner.

Saturday was the first time they had seen their father since he was admitted two Mondays ago.

Mrs Peters said they are clutching at straws looking for anything that can give her husband hope, owing to the fact he is one step away from going on a ventilator.

Mr Peters, a Trinidad and Tobago-born accountant who has lived in Jamaica for the last 20 years, was admitted to Cornwall Regional two Mondays ago. He was moved into the ICU last Saturday at 2 a.m. after his condition worsened.

His children made the card because of how much they miss him.

“We want him to feel better. I felt important just being there. We play football together and I miss that,” said Ravi.

His six-year-old sister wants a daddy-daughter day just so they can play soccer together. Peters is an avid footballer, and so, too, is Rebbekah.

The kids are also praying for a ‘Yes Day’, which is akin to the 2021 Netflix movie in which for 24 hours parents do everything their children ask for.

“They want to experience that with us,” said Mrs Peters.

Richard Peters, like the rest of his family, reportedly contracted the coronavirus from his household helper. The rest of the family are now free of the virus, Mrs Peters said.

“Our helper returned and was not feeling well, but we never suspected corona, owing to the fact she did a series of blood tests,” Mrs Peters said, adding that it was a persistent cough that tipped them off.

Mr Peters was the last member of the family to start showing symptoms. He was not as fortunate as the others, as a history of hypertension made him more vulnerable to the ravages of COVID-19.

Mrs Peters credits the family’s faith in God for the ability to see her husband. Only one patient in ICU has access to a window line of sight: Richard.

“Every day we go there and wave to him and he waves back,” said the woman who manages Jamaica National branches in Catherine Hall and downtown Montego Bay in St James, and Falmouth, Trelawny.

More important, Mrs Peters says her neighbours and church family have been a tower of strength.

“Our neighbours bring bread and leave food at our gate - banana, pineapple, pumpkin to make soup for Richard - and they call every day to check up on us,” she said.

She has also been gifted herbal remedies like vervain, fever grass, mint, ginger, and sour orange, among other produce that sit on her kitchen counter.

“We have eyes all over. We feel like original Montegonians. Even the pharmacist, Cheryl Reid at Clinicare, goes out of her way to ensure we are comfortable,” said Mrs Peters.

She is asking for prayer from Jamaicans that the husband and father of two will pull through.

“God is showing us mercy,. The fact they gave Richard a window. You know how many people in ICU don’t have a window?” she said.