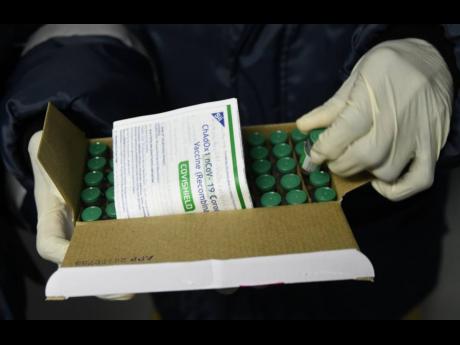 File
An audit into the missing vial of COVID-19 vaccine at the Cornwall Regional Hospital was inconclusive.

WESTERN BUREAU: Officials at the Cornwall Regional Hospital (CRH) have been urged to overhaul oversight of vaccine storage controls in the wake of an audit mounted after an Oxford-AstraZeneca vial went missing a week ago. There was no evidence of...

Officials at the Cornwall Regional Hospital (CRH) have been urged to overhaul oversight of vaccine storage controls in the wake of an audit mounted after an Oxford-AstraZeneca vial went missing a week ago.

There was no evidence of corruption among staff, according to a report issued by Darion Thompson-Smith, senior internal auditor at the Western Regional Health Authority (WRHA).

Staff who were redeployed during the ongoing investigation have been reinstated to their substantive positions.

The report revealed that there was no evidence that the vial, which contained 10 doses of the vaccine, was stolen. There was no conclusion on what happened to the vial.

There was no conclusive statement accounting for the missing vaccine. This was attributed to the varying dosages in vials, the report said.

“The number of doses that could be drawn from a vial is inconsistent (ranging from nine to 11 doses) and there was no record to confirm the amount drawn from each vial,” the report said.

“Whilst the possibility provoked the thought process, this could not be confirmed by internal audit.”

According to the report, vaccines were kept in an igloo stored inside a designated refrigerator, which was not secured. It was also revealed that there was no surveillance system in the room where the refrigerator was located.

Errol Greene, regional director of the WRHA, acknowledged the refrigerator’s lack of security as a particular weakness that has been addressed at other storage sites under the WRHA’s jurisdiction.

“We have taken that recommendation and have reinforced it at the other sites. It is an observation that the auditor made, and it is a weakness in the system,” said Greene.

However, Greene expressed surprise about the claim of a failure to issue standard operating procedures to vaccination facility managers across the region.

“I am surprised at that statement because I know that a lot of time and effort was spent in training. Maybe it was not documented, but I know that effort was put into training and preparation for the administration of the vaccine,” said Greene.

– Adrian Frater and Christopher Thomas contributed to this story.